Please meet “progressive communicator”, as he calls himself, TJ Helmstetter, formerly employed by the DNC. This social justice warrior’s chest was puffed up with righteous indignation this week at a restaurant in D.C. where, even though he didn’t have a bandana over his face or a made-for-old-man-thumping crowbar in hand, figured on intimidating someone for wearing a MAGA hat.

This loser obviously expected to be applauded and maybe make the viral hero circuit. Instead, in front of the MAGA man’s girlfriend, (but not his own significant other, who we hear is a model in Canada), he was the one who ended up getting kicked out of the barbecue joint. 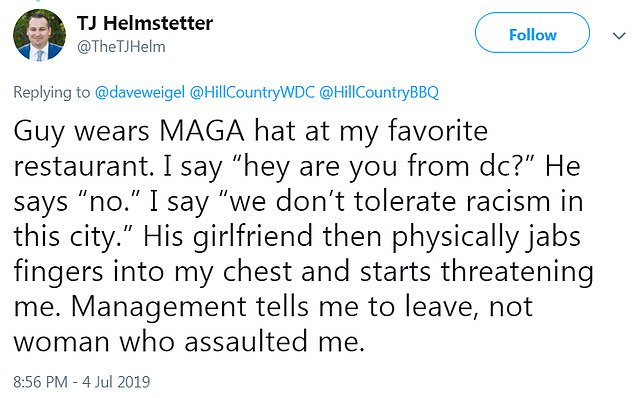 Distressed, but not defeated, the warrior ranted and whined about it on Twitter, obviously expecting that at least there his public virtue dividends would pay off. 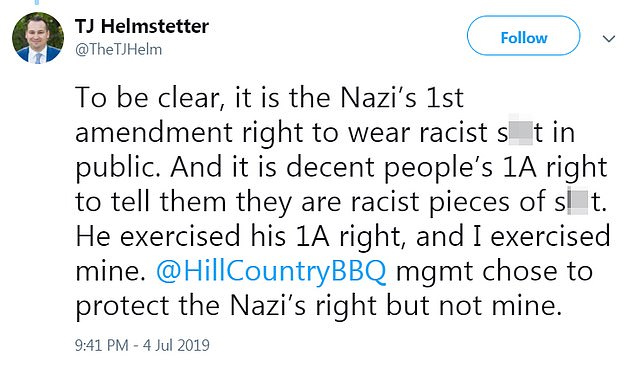 But I guess all the libs were busy writing articles about how the Fourth of July is racist and American flags are offensive and didn’t have time to organize a mob in solidarity with his war against hats. Instead, he got dragged all to hell by people on the right and people who may not be political but happen to not be obnoxious pieces of dirt. 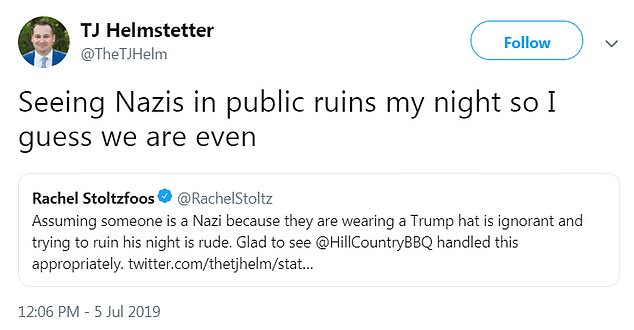 Assuming someone is a Nazi because they are wearing a Trump hat is ignorant and trying to ruin his night is rude. Glad to see @HillCountryBBQ handled this appropriately. https://t.co/vRCcllN4RE

This guy was harassing a Trump supporter in the restaurant and now claims to be the victim. https://t.co/TOvLAosO0k

About @TheTJHelm, this is the guy who was thrown out of a restaurant after berating someone with a MAGA cap and now thinks he’s the victim. He is reveling in retweeting the stuff said about him as if he is a hero and insulting Trump voters showing how little he knows anything. pic.twitter.com/TLsLJIKomY

This is the saddest thing anyone has ever intentionally tweeted about themselves pic.twitter.com/tYi2VBH1s9

Last night in Washington, D.C., we had an unfortunate incident and had to ask a guest to leave due to their hostile behavior towards another guest in the restaurant. Hill Country Barbecue Market is in the business of serving great barbecue with friendly and hospitable service.

In return, we ask our guests to be respectful and polite to each other. We continue to ensure our restaurants are a safe place for all of our employees and our guests. 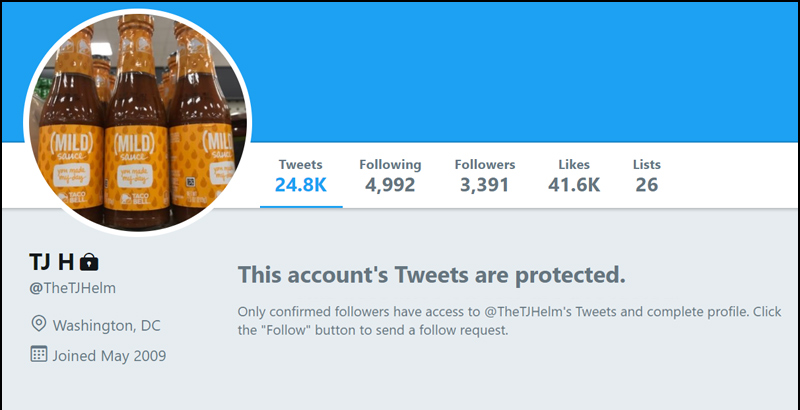 Tough break, T.J. Helmstetter. Maybe the next time you want to be a **** in public, don’t do it on a holiday. Do it on a work day. Progressives seem to spend a lot of time obsessing about things and tweeting on business days, for some reason.