A former FBI Special Agent and trained federal investigator, Derek Somerville, has uncovered a massive number of people who voted absentee in Georgia in counties where they no longer live. We’re talking well over 57k. Here’s his analysis:

Don’t think there are voter issues in Georgia? I have 57,793 reasons to reconsider that.

FACT: at least 57,793 Georgia voters cast their vote in a county that is DIFFERENT than where they previously instructed the USPS to forward their mail.

FACT: 17,514 of these voters asked the USPS to forward their mail OUT OF STATE to non-APO/DPO/FPO military addresses. 89% are over the age of 25 and likely not college students.

It’s been a few years, but most of you know I’m a former FBI Special Agent. Prior to that I worked in the US intelligence community. I’m a trained federal investigator who was assigned to Public Corruption cases. There are others more experienced than me, but this if far from my first rodeo.

With few exceptions, a person submits a USPS Change of Address request because they have permanently moved and want their mail rerouted to their new address. Under the 1993 National Voter Registration Act (NVRA), states may use that USPS Change of Address request to “identify registrants who may have changed residences” and “remove the registrant from the voter rolls after satisfying all requirements of the [NVRA]”.

Many of these incidents can be legitimately explained. Not all reveal nefarious intent or coordinated efforts. Some voted Republican. Some voted Democrat. But after investigating a random sample of these voters, it’s abundantly clear that thousands, if not tens of thousands, voted in our election who do not reside in the county in which they voted…or even in Georgia.

Demand officials investigate these 57,793 and, if warranted, remove their votes from the November 3rd general election and remove them from the voter rolls before the upcoming Senate run-off.

In fact Sommerville did post one record so far on his facebook as an example of what he’s talking about: 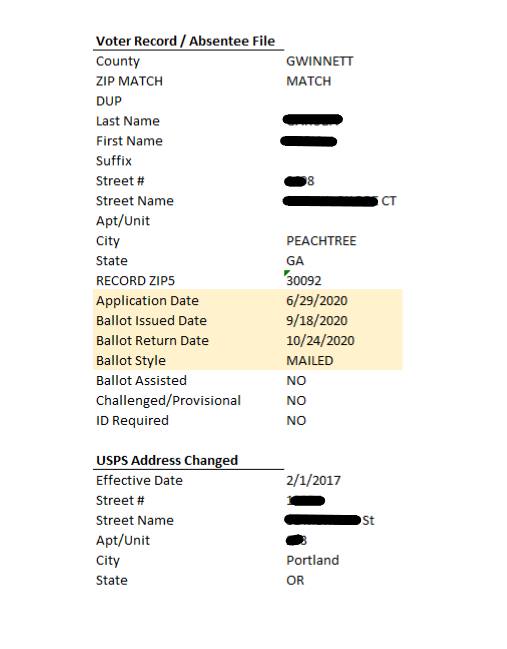 Here’s his explanation of this record:

Jane is currently registered to vote in Georgia.

Jane requested her Georgia absentee ballot on June 29, 2020. It was issued to her on September 18, 2020 at a Georgia address. Jane returned her ballot via mail on October 24, 2020. And with that, Jane voted in our election.

The only problem is Jane instructed the US Postal Service to begin forwarding her mail to Portland, Oregon effective February of 2017.

And since May of 2016, ‘Jane’ has been employed as a Registered Nurse at a downtown Portland hospital. Jane conveniently has an apartment in downtown Portland too. In fact, this is the 4th apartment Jane has listed as her private residence since moving to Portland in late 2016 / early 2017.
Jane has a boyfriend in Portland. Jane teaches fitness classes at a local fitness center in Portland. Jane posts pictures of herself all over Portland on social media.

Jane has been in Portland for 4 years and has set herself up with a nice life there. Good for Jane. But Jane DOES NOT LIVE IN GEORGIA.
Now, several of her family members still do live in Georgia. In fact, some at Jane’s old address. And you guessed it, 2 of them received their absentee ballots at that same Georgia address. Remarkably, despite living 2,600 miles away, somehow Jane managed to return her mail-in ballot to the county Registrar’s office ON THE SAME DAY as her 2 family members’ ballots. From Portland. 2,600 miles away.

Think about that for a second.

Jane no longer resides in Georgia and it appears her ballot was completed by someone else. Or maybe this is completely legitimate. Either way, this is why we have a Secretary of State’s office – to investigate and ensure the integrity of our elections.

More to come, including the file itself.

This is the kind of investigation that needs to happen in an official capacity. And every freaking one of these people who committed voter fraud needs to be prosecuted to the fullest extent of the law. But I suspect it isn’t just individuals doing this on their own, especially for it to happen with this many votes.