William McSwain, a former US Attorney in Pennsylvania, has written a letter to President Trump asking for his support as he mounts a run for governor of the state. In the letter he points out that not only has he prosecuted past election crimes in Philadelphia, but as US Attorney, he wanted to investigate voter fraud claims in 2020 that came about from the election.

However, he said AG Barr gave him a directive to pass along any serious allegations of voter fraud to the Democrat state attorney general, the same top law enforcement official that had previously claimed just days before the election that Trump could not win the election, trying hard to tilt it in Biden’s favor.

In other words, he was not to investigate any serious voter fraud allegations and was told not to make any allegations known to the public.

McSwain says he strongly disagreed with this, especially in light of the fact that he’d successfully prosecuted an Election Judge in South Philadelphia, in the spring of 2020, for stuffing the ballot boxes after taking bribes from a former Democrat Congressman.

I’m not sure at this point how the letter became public, but you can read it below: 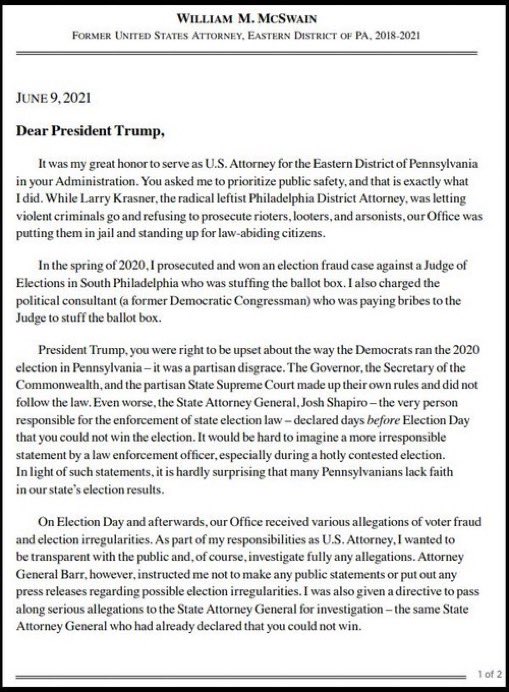 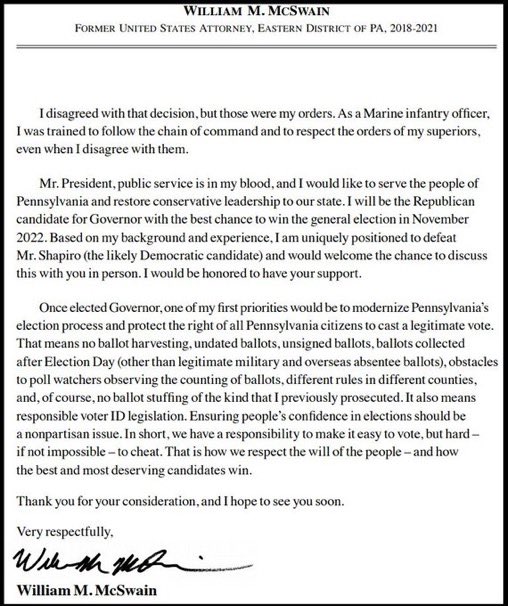 Below is some reaction to the news:

Barr said he hadn’t seen any fraud, but thousands signed affidavits as witnesses to it.

A letter from the former Pennsylvania U.S. Attorney William McSwain to President Trump has been made public recently & it confirms that AG Bill Barr instructed McSwain to ignore claims of voter fraud AND to pass "serious allegations" over to the DEMOCRAT state AG.