It was reported this morning that US GDP growth slowed to the lowest level during the pandemic recovery, falling well below expectations:

CNBC – The rate of growth for the U.S. economy slowed to its lowest pandemic-era pace in the third quarter as supply chain issues and a marked slowdown in consumer spending stunted the expansion, the Commerce Department reported Thursday.

Gross domestic product, a sum of all the goods and services produced, grew at a 2.0% annualized pace in the third quarter, according to the department’s first estimate released Thursday. Economists surveyed by Dow Jones had been looking for a 2.8% reading.

That marked the slowest GDP gain since the 31.2% plunge in the second quarter of 2020, which encompassed the period during which Covid-19 morphed into a global pandemic that resulted in a severe economic shutdown that sent tens of millions to the unemployment lines and put a chokehold on activity across the country.

Below is a graph from CNBC: 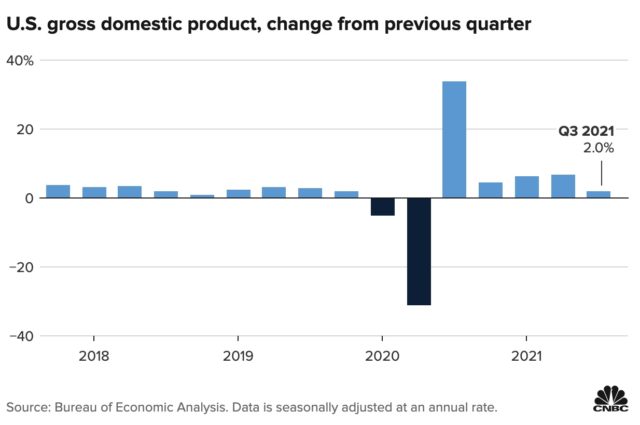 Despite all of this, Biden is trying to rework his so-called ‘Build Back Better’ reconciliation bill with a modified framework so that it passes both houses of Congress. Here’s what that looks like:

Doubling the size of the IRS to try to wring $400 billion out of Americans (mom and pop — the big companies will always have better tax lawyers than the IRS) is a recipe for disaster. https://t.co/sM2myaLaPe

Shapiro makes the point of the day: “So, the economy grew at 2% last quarter in what should be the middle of a boom time. And Biden's great idea is radically increasing taxes, boosting the IRS, and punishing businesses.”

So, the economy grew at 2% last quarter in what should be the middle of a boom time. And Biden's great idea is radically increasing taxes, boosting the IRS, and punishing businesses. pic.twitter.com/wAvyaLUrTx

This would make an already weak economy far worse that looks like it’s already heading toward a recession.

The good news is that some are saying it’s still too general to pass:

Biden’s framework is for $1.75 trillion to $1.9 trillion, @RepJayapal tells @elwasson.

The loose outline is NOT enough to allow her to vote for infrastructure, she says. “It’s still very general right now,” she says.

Other Dems also stressing there is no deal yet.

Let’s hope the bill remains dead in the water.