Writing in his new memoir, Gov. Andrew Cuomo again blamed Republicans and The Post for the controversy surrounding his own policy barring nursing homes from turning away people on the basis of a coronavirus diagnosis.

“The most painful aspect of the COVID crisis has been its devastating effect on our elderly in nursing homes,” writes Cuomo in “American Crisis,” out Tuesday.

As of Sunday, nearly 6,700 people had died in nursing or adult-care facilities of confirmed or presumed cases of the coronavirus, according to state records.

“By early spring, Republicans needed an offense to distract from the narrative of their botched federal response — and they needed it badly,” Cuomo continued. “So they decided to attack Democratic governors and blame them for nursing homes.”

“It wasn’t just me,” he continued. “[Gov.] Phil Murphy in New Jersey, Gretchen Whitmer in Michigan, Gavin Newsom in California and Tom Wolf in Pennsylvania were all in the Republican crosshairs on nursing homes. As the states with the most deaths were Democratic states, the Trump forces saw us as an easy target.”

There’s a couple of things to say about this. First, and obviously, this was HIS covid policy in March. His name is on it and he’s the one who forced these nursing homes to take back COVID patients which led to thousands of deaths. 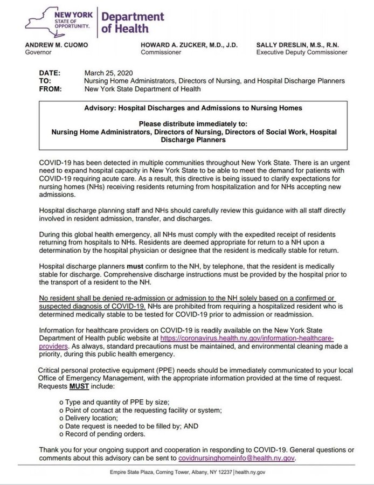 Secondly, it’s absolutely reprehensible for him to blame this controversy on anyone other than himself. But there’s a reason he can do this, because the garbage Democrat media refused to hold him accountable for it. Only conservative media, Republicans, the New York Post and Fox News ever really reported on it, and he’s now using that as a basis for his attack. The 5th column has despicably given him cover for these deaths because all they care about is attacking President Trump and getting him overthrown. Also he’s one of their own, a Democrat.

I’ll be on @TuckerCarlson tonight.