Trump was known for a stock market that constantly set new records of growth during his presidency. With Biden, he’s going to be known for soaring gun sales that smashed previous records of his predecessors:

DC EXAMINER – The FBI and the firearms industry reported Tuesday that sales and gun background checks smashed through past records as people grew increasingly worried that the new Biden administration will impose gun controls.

When adjusted just for gun sale background checks, the National Shooting Sports Foundation said that the increase over January 2020 was 75.2%. While not an exact count, the numbers generally track sales. 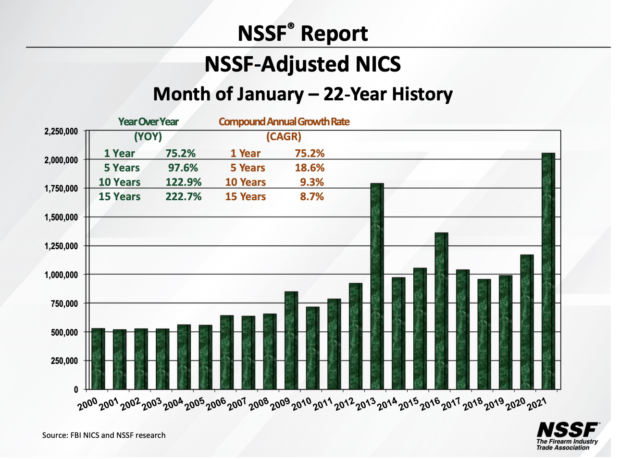 And not only was it the highest number of background checks ever recorded (overall and just for guns), but it also doesn’t include thousands of gun purchases in states where the check isn’t required.

Some states saw astronomical increases. Michigan was one of them. “NSSF-adjusted NICS for the state of Michigan in January 2021 were 264.4% higher than January 2020, which accounts for an additional 57,016 checks over the same time period,” the group told industry officials.

I don’t think it’s all Biden. Between the pandemic and Black Lives Matter protests all around the country, gun sales have been surging for the past year. But I do think it is Biden, because he’s the most radical president we’ve had up to this point and people are right to be worried that he’ll come for their guns.

With all these new gun purchases I’ve been watching the sales of ammo and talk about skyrocketing. It used to be, before the pandemic, that I could buy 100 rounds of 9mm for about $20. That price tripled during the pandemic to $60 and is now somewhere between $80 and $100 per box. I’m not kidding. Some gun stores aren’t even selling ammo because they are saving it all for new gun sales. You gotta have ammo with your new gun.

Manufacturers like Federal say they are producing more ammo than they ever have and they still can’t keep up with demand. So in reality, this is a really bad time to be a new gun buyer because ammo has reached insane price levels and I don’t know if it will ever come back down.