Dumb crooks are a long-standing theme as objects ridicule in polite society, and since you have to be pretty not sharp to be a Portland rioter in the first place, there were BOUND to be incidents of elaborate stupidity coming out. And boy howdy have they.

Three examples from just this week are competing for the top spot currently.

This first guy, from a few days ago made the funny papers for his Stupid Crook antics. Here’s a hint: Don’t wear a name tag. Not on your shirt, and not on your …

A Portland man has been charged with arson after rioters broke into and set fire to the Justice Center on May 29, 2020. Read more: https://t.co/SZO7CdnVUM pic.twitter.com/3ZRkBHvSku

Amazing detail about the protester charged with arson in Portland. It's basically "Authorities were able to locate him thanks to a distinctive 'I, Edward Thomas Schinzing, love lighting the Justice Center on fire' tattoo that proved a valuable lead"https://t.co/EjaEYoYH2s pic.twitter.com/Prlo7Lgvg2

Yes that’s a bit of jokey phrasing. But seriously, he did have his name tattooed on himself, as the Oregon Attorney General’s office explained:

Among those who entered the Justice Center, Schinzing was identified by a comparison with a jail booking photo and a distinctive tattoo of his last name across his upper back. Schinzing spread a fire that started near the front of the office by lighting additional papers on fire and moving them into a drawer of a separate cubicle.

One of the guys who set the fire in the Portland Justice Center, Edward Thomas Schinzing, has been arrested. He faces 20 years in federal prison. They identified him because he has his surname tattooed on his back.

Then there’s this kid, whose actions were dumb enough, but even dumber was letting his Trump-loving Grandma find out about them.

You may remember him from video this week, of a bomb being thrown at the police.

Rioters threw a bomb at the front of the Portland federal courthouse. This wasn’t one of their usual firework explosives. #PortlandRiots #antifa pic.twitter.com/omCq0GtZMj

The New York Post has this terrific detail to add.

A Trump-loving, 69-year-old woman soon stepped forward to out the suspect publicly — as her own grandson.

In the hours after the IED attack, social-media users analyzed videos showing a slim male, wearing a distinctive olive vest with the word “ICONS” printed on it, throwing something over the fence at the Mark O. Hatfield Courthouse. Seconds later, a large explosion erupts, covering the front door in flames. The man picks up something off the ground and sprints off-camera. Police said the concussion could be “heard and felt more than a block away.”

Fox instantly identified her grandson because she gave him the vest.

The picture with the story is right near perfect. 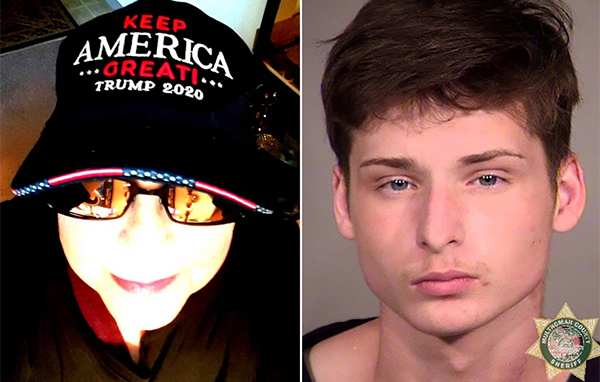 But it’s this genius who is the talk of the town and really LIGHTING UP Twitter on Saturday after Andy Ngo shared his rocket scientist antics.

Rioter tries to aim rocket at the Portland federal courthouse but it misfires on him, burning his hand. Video by @livesmattershow. #PortlandRiots #antifa pic.twitter.com/XskvfH2S6n

Was it a peaceful rocket?