The website Memri, known for monitoring and translating the Middle East, has uncovered a doozy for us in recent days and it goes right along with what we’ve been saying about Erdogan’s plans to resurrect the fatally wounded head of the Ottoman Empire.

First allow me to set the scene.

On December 6, as you well know, Trump changed US policy recognize Jerusalem as the capital of Israel and set in motion a plan to move our embassy there from Tel Aviv. That brought about outrage and protests in the Middle East – some violent – and condemnations from all over Muslim world of Trump’s decision. Even the UN tried unsuccessfully to get Trump to undo his decision.

Then Erdogan steps up and takes charge of this issue on behalf of the Muslim world, making ominous threats against Israel that sound akin to invasion while leading the OIC to recognize East Jerusalem as the capital of Palestine.

Six days after Trump made this recognition of Jerusalem as the capital of Israel, one of the top news websites in Turkey ran an article entitled “What If an Army of Islam Was Formed against Israel?” They ran it on both their newspaper (below) and on their website.

This is exactly what the Bible predicts will happen in the last days, as we’ve explained at some length in our Bible Prophecy Primer. Ezekiel 38 specifically explains how Turkey, partnered with Iran and many other Muslim nations will invade Jerusalem. Zechariah 14 talks about how the nations with gather against Jerusalem in the last days and that the city shall be taken and half of the city exiled to other countries. And on and on we could go.

Now before we get to the nitty gritty details of this Yeni Safak article, you need to first know something about the source of the material Yeni Safak used. This is where some excellent research from Memri comes in to play. They explain that the source of this material is from an organization called SADAT:

The main points of the article are taken from the website of the Turkish SADAT International Defense and Consulting Company, which provides consultancy on defense and warfare, both conventional and unconventional, and on military organization, training and gear. The company has an agenda of promoting pan-Islamic military cooperation. According to its mission statement, it seeks “to establish defense collaboration and defense industry cooperation among Islamic countries, to help the Islamic world take its rightful place among the superpowers by providing… strategic consultancy and training services to the militaries and homeland security forces of Islamic countries.”

According to Israeli security sources, the SADAT company is involved in aiding Hamas, and seeks to assist – with funds and military gear – the creation of a “Palestine Army” to fight Israel.

…SADAT, a private paramilitary group which emerged from the shadows on the evening of the coup: Eyewitnesses say SADAT members fired into crowds and Turkish military officers suspect SADAT snipers to be responsible for at least some of the casualties that occurred on the trans-Bosporus bridge.

Adnan Tanriverdi, a former general dismissed for his Islamist leanings after the 1997 coup, founded SADAT in 2012. After the coup, Erdogan brought Tanriverdi into his office as chief military counselor. Thanks to a rule change made at Erdogan’s direction, many Islamists dismissed from the military who found refuge in SADAT subsequently re-joined the military with retroactive credit for promotions they did not receive in the military because of early termination.

…SADAT appears increasingly to act as Erdogan’s personal militia or a Turkish equivalent of the Islamic Revolutionary Guard Corps.

The “Turkish equivalent of the Islamic Revolutionary Guard Corps.” Also Adnan Tanriverdi is pictured above in the center.

Memri explains that the information used in the Yeni Safak article was taken from a PDF that no longer exists on the SADAT website. But Memri has it available upon request. Now that you know that the information in the Yeni Safak article came from a paramilitary shadow organization hell bent on destroying Israel, which was formed by Erdogan’s chief military advisor, let’s proceed to the article.

Below are Memri-translated sections of the article:

“This Wednesday, Istanbul will host an extraordinary summit of the Organization of Islamic Cooperation, at which decisions on military and economic issues will presumably be made. In this framework, it becomes evident that the member states’ [joint] military might greatly exceeds that of Israel. Moreover, in a possible military operation, this superiority [can] be realized on the ground by [setting up] joint military bases for ground, air and naval forces. Below are a map and statistics presenting a comparison between Israel and the [proposed] Army of Islam…

“What If An Army Of Islam Was Formed Against Israel?

“If the OIC member states unite and form a joint military force, it will be the largest army in the world. These countries’ total population is 1,674,526,931. The number of soldiers in active service in these countries is at least 5,206,100. Their [overall] military defense budget, of $174,728,420, is also worthy of emphasis.

“As for Israel, it is significantly inferior. The population of this country, which attempted to occupy Jerusalem while surrounded by Muslim states, is 8,049,314. Note that the population of Istanbul alone exceeds 14 million. The number of soldiers in active service in the [Israeli] occupation forces is 160,000, and [Israel’s] defense budget is approximately $15, 600,000,000.

Notice the argument they are making with numbers. Essentially they are saying that if the entire Muslim world combines their resources, then invasion will easy peasy because they will be mammoth compared to tiny Israel.

Here’s an infographic from the article making this same argument:

Infographic comparing the OIC countries with the Israel: 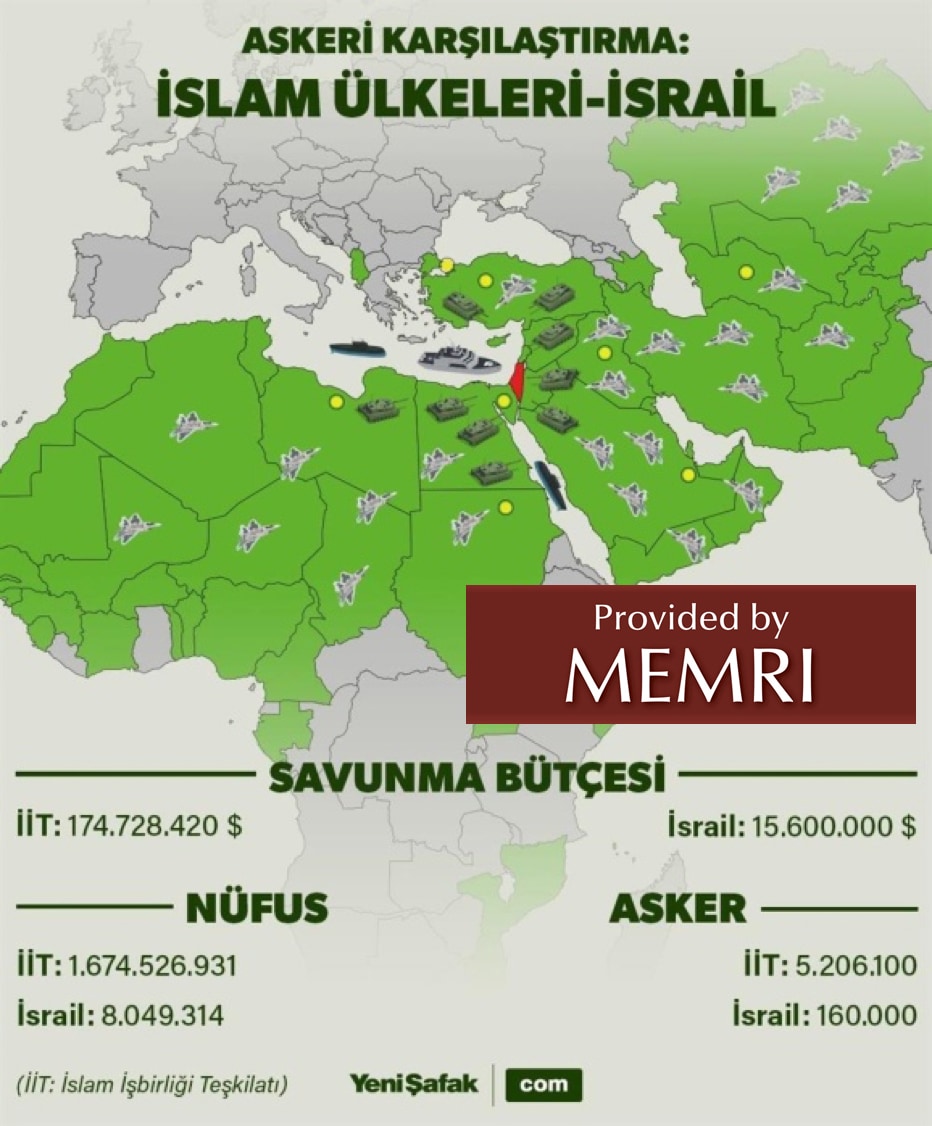 Notice all of the Muslim countries, from Kazakhstan to Pakistan to Turkey to N. Africa, highlighted in green with tanks, ships, submarines, and military jets all aimed at a very surrounded and under siege nation of Israel. Pretty remarkable that they just put this out there.

“Among the decisions that can be taken at the OIC [summit] is to form a ‘Jerusalem Task Group.’ In this framework, military steps are likely to be taken. The [Muslim] armies, ranging from Africa to Asia, surpass the Israeli [army in might]. So if an Islamic army is formed, Israel will be under a siege.

“At The First Stage: 250 Thousand Soldiers

“In a possible military operation, the first step is expected to involve 250,000 soldiers, and the establishment of joint land, air and naval bases for use in the short term.

“500 tanks and armored vehicles, 100 war planes, 500 attack helicopters and 50 warships and submarines can be mobilized.

“Eskişehir – Konya – Kilis: In case of a military operation, air bases in various locations will house 100 planes and 500 attack helicopters, and also serve as reinforcement and supply bases. 250,000 military staff, including pilots, will be ready for duty.

[Northern] Cyprus: In case of a military operation, the 50 warships and submarines stationed in naval bases can take an active role [in the fight] against Israel in the Mediterranean and the Red Sea. The Turkish navy, among others, will participate in the operation. Together the forces will comprise 250,000 men.

“The war planes that will be dispatched to the region from greater distances will be stationed in airbases [closer to Israel]. Israel will most likely to be besieged by the naval fleets that will be sent to the Mediterranean and the Red Sea.

“The military capability of the OIC member states is considerable. These armies have the necessary equipment to carry out a military operation on land, sea and air.

I know that most of what we are reading here is summary data, but it’s an awful lot of detail for a newspaper article. This isn’t something that some editor just whipped up on the fly. It came from Erdogan’s shadowy paramilitary organization. This is what they are planning!

Despite Yeni Safak telegraphing this for us to see last December, I still think we are at the very least several years away from this actually happening. Right now Erdogan is traveling all over the Middle East and Africa building these alliances. Next year Erdogan will officially run for president of Turkey under their new constitution (that was voted in last year), and 2023 is slated as the centennial when Erdogan wants to announce his resurrected neo-Ottoman caliphate.

But that being said, it does feel like to me that we are at the very beginning stages of what will eventually culminate into an invasion of Israel that will only end with Armageddon, when Christ returns. It honestly felt that way to me in December after watching Erdogan attempt to unite the Muslim world around him on the issue of Jerusalem. But it does even more so now that I’ve see what Erdogan’s SADAT is planning.

I’ll leave you with this from Zechariah 14: