IN one of the nuttiest craziest things I’ve ever seen, a bunch of weirdo palestinian activists started screaming at preggers Chelsea Clinton because they think that her tweet against Ilhan Omar lead to dead bodies.

And there’s video of this insane event!!

Here’s the video that @Esor__Fasa put up where her friend is attacking Chelsea Clinton at a memorial service and linking her to the New Zealand massacre because Chelsea dared to call out Ilhan Omar’s anti-Semitism.

Yeah, they’re accusing Chelsea Clinton of causing the massacre in New Zealand! They’re insane!! In fact, they’re so crazy that the girl who posted the video had to shut down her account after she was nailed with backlash.

Here’s the nutcase that actually yelled at Chelsea: 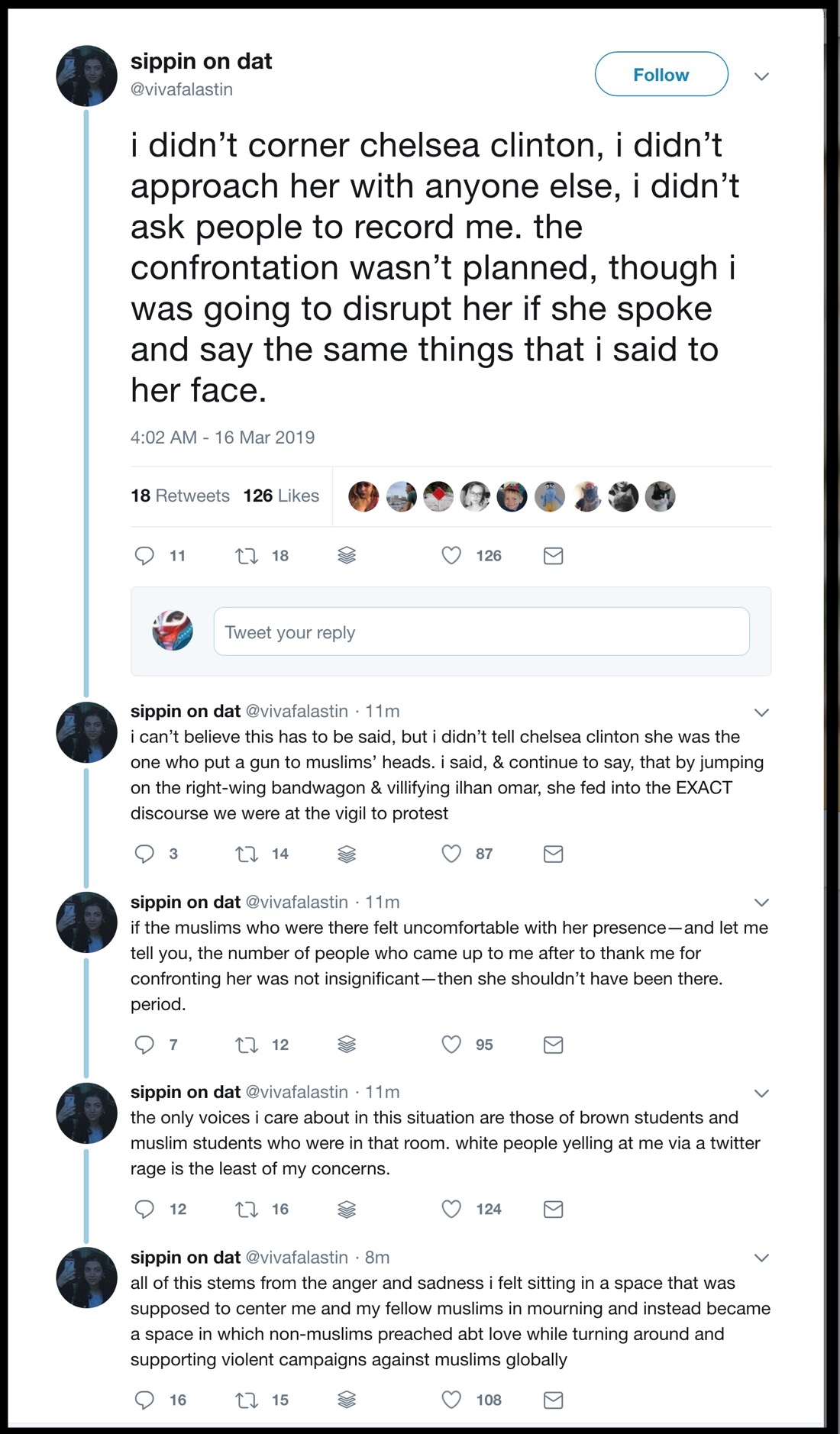 Now you all know we’re the last people anyone would call fans of Chelsea, but this is abjectly stupid. Conservatives [and others] were actually having to defend Chelsea from these idiots.

Shame on these far-left activists who ambushed Chelsea Clinton when she was going to a prayer vigil for the victims of Christchurch.

You dont have to agree with Clinton politically, but as a human who cares for others, it's disgusting the treatment she received today.

Chelsea Clinton attended an NYU vigil & students confronted her, blaming her for the New Zealand massacre.

As much as I dislike the Clintons, Chelsea is not responsible for the attack.

This is a clear example of how divided the democrat party is & the alt-left is winning.

when the left has led the right to staunchly defend Chelsea Clinton, then the left must be irretrievably lost.

it’s not “woke” to blame chelsea clinton for the christchurch massacre because she called out ilhan omar for being anti-semitic (which she was). you’re just being an asshole desperate for a viral moment.

This is NUTS. Chelsea Clinton simply called out @IlhanMN’s anti-Semitism and is now being attacked by leftists over “islamophobia” and linking her to the New Zealand massacre.https://t.co/TyzUxgf36M

The year is 2019 and I’m defending… Chelsea Clinton.