Last week we told you when Sultan Erdogan turned Hagia Sophia, the 4th century church ordered built by Emperor Constantine, back into a mosque. It was previously turned into museum back in 1934 after the fall of the Ottoman Empire. After Erdogan did this, he sent this announcement out via his Facebook page to the Arabic world: 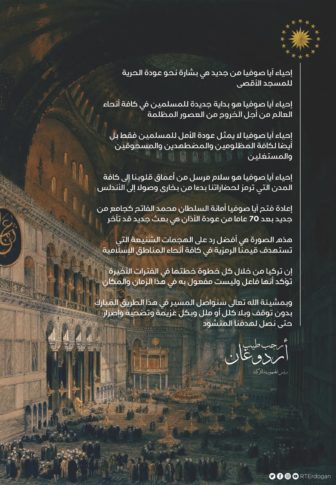 Below is the translation:

To revive Hagia Sofia anew is the good news towards the return of freedom to the Al-Aqsa Mosque (in Jerusalem).

To revive Hagia Sofia is a new beginning for all Muslims around the world to come out of the dark ages.

To revive Hagia Sofia does not return hope only for Muslims, but for all disenfranchised and persecuted people.

To revive Hagia Sofia is peace, sent from the depths of our hearts to all the cities that symbolizes our civilization, beginning from Bukhara (area of Afghanistan and Pakistan) and ending at Andalusia (Spain).

To reopen Hagia Sofia is the trust given from Sultan Muhammad Al-Fatih (Muhammad the 2nd, conqueror of Constantinople), as a mosque anew, after 70 years, to resume the call to prayer is a new resurrection which was delayed.

This view is the best response to the ugly attacks that aim at our symbolic values in all the Muslim regions.

Turkey, through every step it took, in the recent time assures it is dominant, not dominated in this time and this place.

By Allah’s will, we will continue this blessed path without seizing, without boredom, and with all the will and sacrifice and persistence, until we reach our glorified goal.

Notice the first thing Sultan Erdogan proclaims to the Arabic world, that ‘reviving’ Hagia Sophia is about freeing the Al-Aqsa mosque which sits on the Temple Mount in Jerusalem. Of course you know what freeing the Al-Aqsa mosque would really mean, the annihilation of the Jewish people. Erdogan has always wanted to return Jerusalem to the Muslim people and now he’s openly proclaiming this to the Arabic world on the very day he made Hagia Sophia a mosque again.

Last week I explained that Hagia Sophia could be the “temple” (read: church) in which the antichrist stands, declaring himself to be God. Again, we can’t know for sure at this point, but I just want people to be open to the possibility. I noted that it could be that when the antichrist does this, he could announce the launch of an attack on Jerusalem. How interesting that the first thing he communicates to the Arab world is about a future attack on Jerusalem!

Erdogan wants the Arabic world to see him as their Caliph and eventually pledge their allegiances to him. We’ve told this for years, that he wants to be Caliph of his new Ottoman Empire that he’s resurrecting in 2023 (the centennial of the fall of the Ottoman Empire). And turning Hagia Sophia into a mosque is part of this.

Erdogan also said that turning Hagia Sophia into mosque means a “new beginning for all Muslims around the world to come out of the dark ages.” By “dark ages”, Erdogan isn’t referring to what we would think of as dark ages. No he means NOW is the dark ages, this entire period of time since the Ottoman Empire fell. He intends to lead the Muslim world back to a new Ottoman Empire as their Caliph.

All of this, the return of the Al-Aqsa mosque and his new Ottoman Empire, is his “glorified goal” which he ends with. And you can believe those days are coming sooner than you think. The seventh kingdom of Revelation 17 is resurrecting into the 8th. Buckle up.