The live stream of the Arizona audit results presentation is ongoing right here. But there’s also a big show outside of the state legislature as folks from around the state and country have gathered for their own various reasons.

That means lots of pics and some video as people share what they are seeing via social media. Since neither Gettr nor Parler have yet (STILL!!) figured out embedding, we’re putting what tweets there are.

🚨 Arizona Capitol right now as the audit report is being released. pic.twitter.com/t8g0YB0skN

The scene inside and outside the Arizona state Capitol today in Phoenix as the results of the 2020 election review are made public. Photos by @mikeblake pic.twitter.com/PLTLmKgsmZ

It’s not just the capitol, there are watch parties in other parts of the city and state.

Self-righteous liberal jerks are there filming and taking photos they think reflect badly on MAGA.

As the hearing began, we had a few hilarious disruptions. This guy was playing a banjo and harmonica, but got screamed away buy some heavily armed folks. pic.twitter.com/EXWEMLEnPn 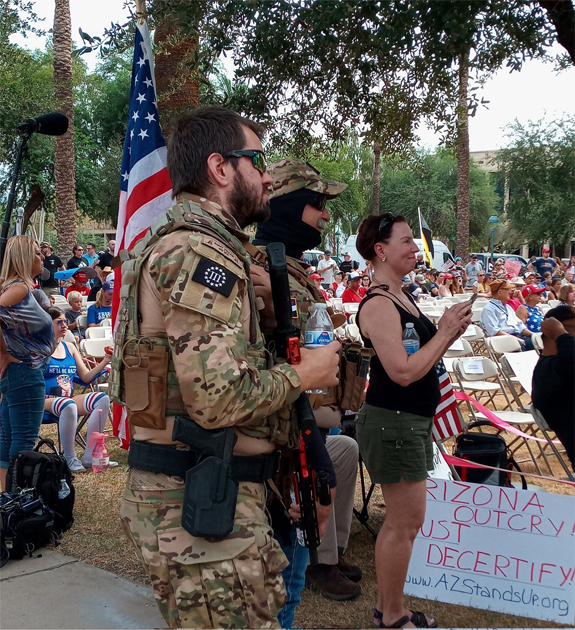 Media is there somewhat.

The crowd is waiting to physically get into the Senate building.
Only 86 people will be allowed inside.
Some have been waiting at the door since “6am.” pic.twitter.com/9j5wkDUDhV

At the #AZ Capitol. A longish line to get into the Senate chamber. pic.twitter.com/5x6fiqIXEu

This is the watch party outside the AZ Senate building.

Senate President Karen Fann just said, “it’s true that the numbers in the [leaked] draft report were close to the [initial] Maricopa numbers.”

It is quiet as people listen intently. pic.twitter.com/7HNtFesstE

Some scenes from outside the AZ State Capitol where a crowd has gathered to watch a livestream of the AZ Audit results later today. On assignment for @azcentral pic.twitter.com/ZhtrOaToRy

As one man towards the front told me, “this is about transparency & getting to the truth. If the presidential election results don’t change, we will eat crow.” pic.twitter.com/vdWARP20ZA

Republican Gubernatorial candidate @MattSalmonAZ is addressing the crowd now.
He said, “we should ask for a special session.”
Some people yell, “demand one!” pic.twitter.com/Ch7T7BtY6t

If there’s more from the crowd we’ll let you know.