In an interview today it appears Joe Biden is reading (or hearing) his responses during an interview with an NBC/Telemundo anchor:

What is happening here in this interview w/ @JoeBiden? After he says he’ll freeze deportations once becoming president, he tells someone off camera, “I lost that line.” Telemundo’s @jdbalart then tells him “We can talk you and I on that.”

José, was he reading his responses? pic.twitter.com/Yoausx0zTr

Notice that while he’s answering the question he’s looking down and to his left. There’s a video screen between Balart and Biden that just played video of a girl asking him a question: 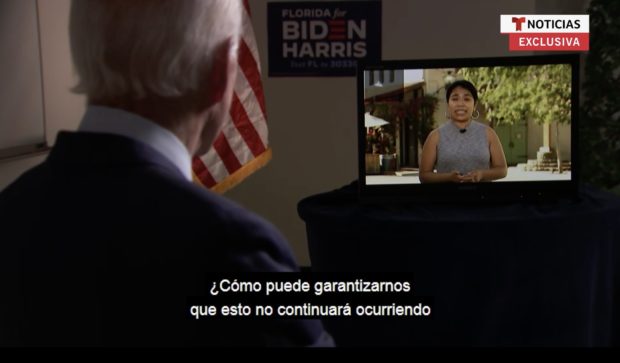 After the video of the girl stops playing, Biden continues to look at the screen as if he’s talking directly to the girl, which is kinda weird. While he’s answering the girl’s question he suddenly says “I lost that line…” to someone off camera. What?

Either he’s reading his answer on that screen which he continues to stare at for whatever weird reason or someone is giving him answers in the ear we cannot see. He doesn’t just say “I lost that line” for no reason.

Here’s another photo of the screen apparatus between Biden and Balart:

If this is what it appears to be, that Biden is reading his answers or hearing them in his ear from someone else, it is horrendous. It would seem his campaign doesn’t trust him and is trying to pull a con job on the American people.

Which makes me wonder what kind of Cyrano de Bergerac garbage are they going to try and pull during the debate? Will he be wearing an earpiece?

This needs to go viral because Biden’s campaign needs to explain why he’s reading teleprompters or listening to his answers during one-on-one interviews. And Balart and NBC needs to explain his participation in this as well.