If you’ve been watching the Climate Strike videos being shared on social media, you have probably decided the end of the world is, in fact, nigh. Not from the climate doom the strikers are predicting, of course, but from the strikers themselves. It’s hard not to see the end of mankind looming in the hysterical, teary-eyed, whimpering masses gathering in massive group therapy sessions to indulge primal screams and talk about how the world is going to be underwater in the next 11 minutes.

Seriously, check it out on Twitter if you have time and no will to live. It’s completely insane.

But if you don’t have the stomach to hear the future leaders of the world quivering in their snow boots about global warming every few days, how about looking back on some of the climate fanatics past predictions. You know, for an estimate on the future performance of their prophetic excursions.

If you’re into that, then oh boy has the Competitive Enterprise Institute got some good dang news. They’ve compiled just fifty of the countless “weather will kill all life on earth” predictions that proved, as such predictions always do, to be nothing but hot air.

What follows is a collection of notably wild predictions from notable people in government and science.

More than merely spotlighting the failed predictions, this collection shows that the makers of failed apocalyptic predictions often are individuals holding respected positions in government and science.

While such predictions have been and continue to be enthusiastically reported by a media eager for sensational headlines, the failures are typically not revisited

You can click through to see the full list, but I want to give you some of my personal favorites.

Yep. Cloud of steam. See if this bit sounds familiar to you, from the New York Times in 1969.

“While Dr. Ehrlich is gathering that evidence in his laboratory at Stanford University, he is wasting no time trying to convince people that drastic action is needed to head off what he foresees as a catastrophic explosion fueled by runaway population growth, a limited world food supply, and contamination of the planet by man.”

They haven’t changed a bit, have they? DRASTIC ACTION NEEDED!!!!! And to avert what? Well exploding into blue steam, of course, said the venerable paper intensely writing this very day about global warming.

“‘We must realize that unless we are extremely lucky, everybody will disappear in a could of blue steam in 20 years,’ the 37-year-old-scientists said during a coffe break at his laboratory. ‘”The situation is going to get continuously worse unless we change our behavior.'”

Change our behavior! They don’t even change the lyrics, y’all.

Look, the blue steam prediction was from the sixties, not recently, so maybe it’s unfair to bring up those scientists. They were practically using leeches and alchemy way back then. What about something more recent? How about a prediction from 2008?

“Hansen, echoing work by other scientists, said that in five or 10 years, the Arctic will be free of sea ice in the summer.”

Wrong. Again. But what’s really great about this one is the chiming in by Democrat Rep. Ed Markey, who called Hansen a “climate prophet.” Oopsie! But neither of them loses an ounce of credibility for being totally wrong. The climate alarmist industry just revises and presses on. Change a few dates, hire some Nordic teenager, and voila, more panic and more cash! 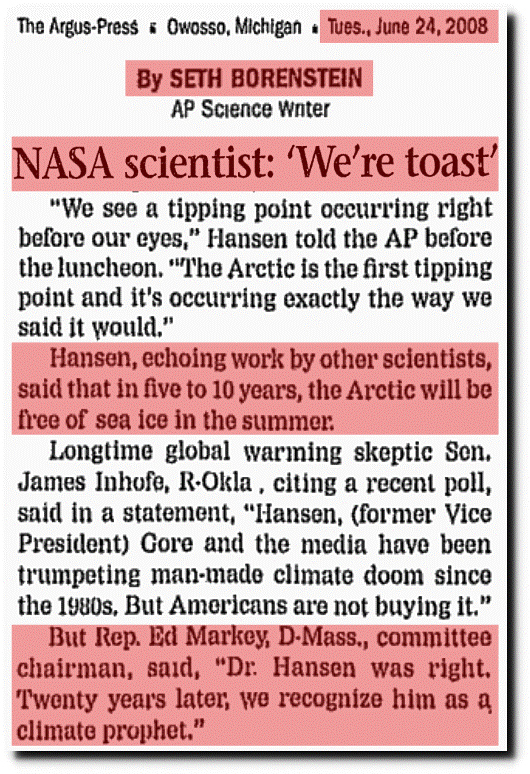 Just one more. This doesn’t need any extra typing from me. Just revel in the glory of it, one of many hundreds of examples from the bearded chakra perv with the carbon factory mansion. 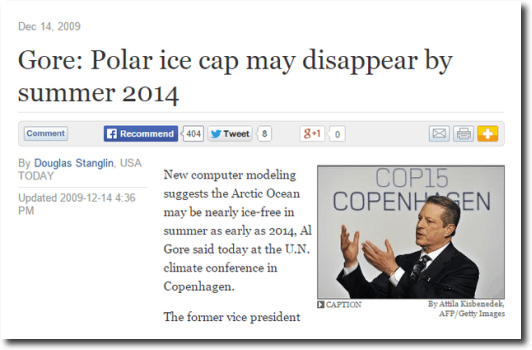 You really must check out all 50 examples. It’s not just a gallery of fail, it’s like a slideshow of global deception. And they have brainwashed a whole generation into living in existential dread.