James O’Keefe has gone on offense and filed a defamation lawsuit against Twitter for banning him under the premise of operating fake accounts, which he says is absolutely untrue:

James O’Keefe made good on his promise to fight back and “go on offense” against corrupt media platforms today, by filing a lawsuit against Twitter — citing false and defamatory statements the company made about him last week.

Project Veritas has already sued and won on Motion to Dismiss against The New York Times for defamation and will sue CNN for similar reasons.

O’Keefe, who was permanently banned from Twitter on Thursday, was accused of operating “fake accounts. O’Keefe operates no fake accounts.

Legal Complaint reads: “This is a defamation action arising from the publication of a false and defamatory statement by Twitter on April 15, 2021 concerning its decision that day to ban Plaintiff James O’Keefe, an investigative journalist followed by over 926,000 Twitter users as of the time he was banned.”

The Complaint continues: “Twitter’s false and defamatory claim was that it removed Mr. O’Keefe because he “operated fake accounts.”

O’Keefe intends to show how Twitter acted with “reckless disregard” for the “falsity of this claim.”

I looked to see what damages they were asking, but they don’t specify a dollar amount. They just say “according to proof” and ask for a few other items as well: 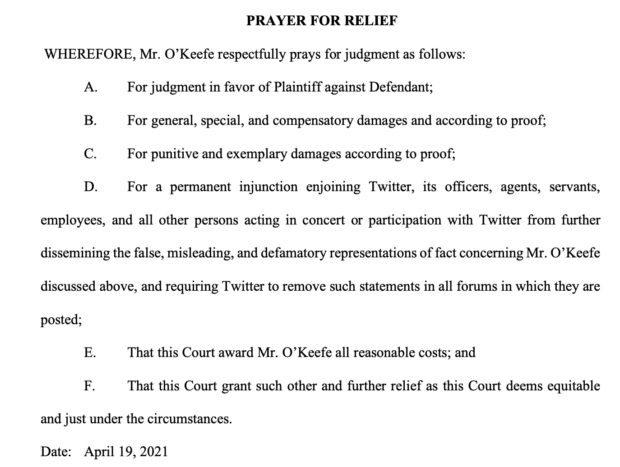 You can read the full lawsuit below: