Over the weekend, we told you that Biden slipped up and described the influx of young people to the border as a ‘crisis’:

President Biden, after finishing golf, says refugee cap was linked to the “crisis that ended up on the border with young people.”

“We couldn’t do two things at once. And now we are going to increase the number” pic.twitter.com/LrU2xQeSCR

Well today, Jen Psaki claimed that the crisis Biden was referring to was the crisis in other countries that drove them here…or something:

She said that Biden “does not feel that children coming to our border, seeking refuge from violence, economic hardships, and other dire circumstances is a crisis. He does feel that the crisis in Central America, the dire circumstances that many are fleeing from, that that is a situation we need to spend our time, our effort on and we need to address it if we’re going to prevent more of an influx of migrants from coming in years to come.”

That’s one of of the biggest bull patties the White House has dropped on the press. The truth is that Biden knows it’s a crisis because it IS a crisis, and much worse than the crisis of 2019. Just look at the blue line SOARING to 25k and that’s only up to March: 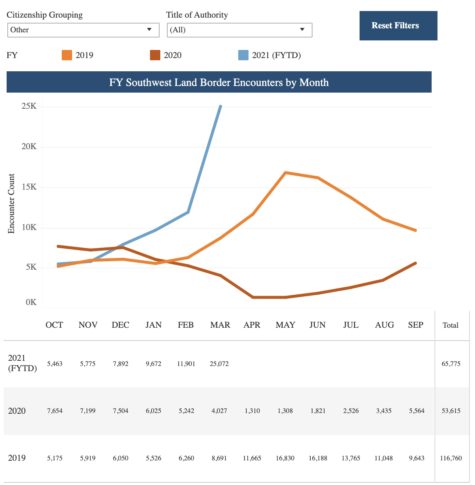 And this is absolutely Biden’s doing. His rhetoric and irresponsible policies have led to this. Heck, he’s even told people to stop coming – that’s how bad it is at the border!

But the White House continues to lie, covering for Biden, and the media refuses to hold them accountable. Like always.