Joe Biden was explicitly named in 2017 by Louisiana attorney Robert W. Fenet as he was trying to help them secure a multimillion-dollar deal with China.

The deal was selling shipping natural gas to the Communist country.

Joe Biden’s name was mentioned prominently in an October 2017 email seeking to firm up a controversial, multimillion-dollar deal to ship natural gas from the US to China, the communication, found on first son Hunter Biden’s abandoned laptop, reveals.

In a missive dated Oct. 27 of that year, Louisiana attorney Robert W. Fenet told Hunter and his uncle, first brother Jim Biden, that he had secured a contact for them at Houston energy company Cherniere, the Daily Mail reported Friday.

“I confirm I have requested [the contact] to be available for a call from Joe Biden and Hunter Biden on Monday morning,” Fenet wrote.

The attorney did not immediately return a message from The Post requesting clarification on why the then-former vice president was name dropped.

President Biden has a history of ties to Cherniere’s executives: He named former company lobbyist and vice president Ankit Desai as his political director in 2005, and former board member Heather Zichal became his campaign climate adviser in 2020.

Although Biden has repeatedly denied involvement in his ne’er-do-well son’s Chinese business dealings, records from Hunter’s laptop and witness testimony suggest he was aware of, if not directly connected to, the transactions.

In emails with Fenet, Jim Biden referred to the Biden clan’s involvement in the project, which involved supplying millions of tons of liquid natural gas (LNG) from Louisiana to Chinese state-backed conglomerate CEFC Energy.

“We Biden’s [sic] often fraught with problems, that they can can [sic] come from working with family members, are of a different mind. It’s all about family, and people we choose to do business with,” Jim wrote Fenet on Oct. 19, 2017.

On May 13, 2017, Hunter’s business partner James Gilliar said in an email that 10% of equity in the CEFC venture would be kept in equity “by H for the big guy.”

Both Gilliar and another Biden business partner, Tony Bobulinski, have said “the big guy” is a reference to Joe Biden.

The email where Biden’s name is mentioned is below: 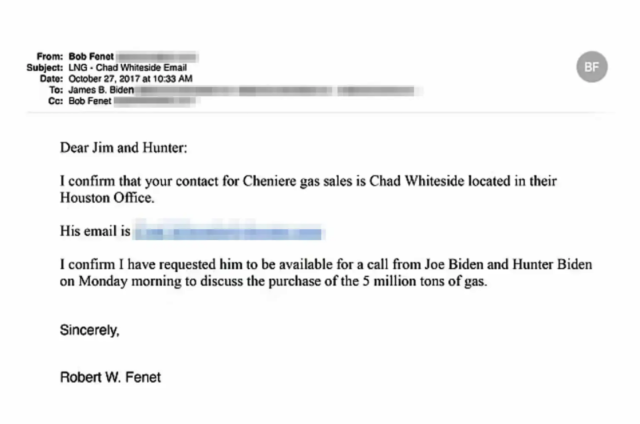 This should be another huge scandal in the media for Joe Biden, but the garbage media is completely ignoring it because Biden’s name isn’t Donald Trump.

It just shows once again how desperately biased they are against Republicans and how they ignore important findings like this to protect their own.