Joe Biden has been quick to weigh in this morning on the leaked ruling from the Supreme Court, which we now know is authentic, and he’s doing nothing but scaremongering over it and lying about it.

This is quite literally a lie. pic.twitter.com/h7jWBN2FHJ

This is what Biden said:

If it becomes a law and if what is written is what remains, it goes far beyond the concern of whether or not there is the right to choose. It goes to other basic rights, the right to marry, the right to determine a whole range of things.

Biden reiterated this sentiment that other ‘fundamental rights’ could be affected by this ruling and suggested he’s going to do something about it:

BIDEN: "There are so many fundamental rights that are affected by that, and I'm not prepared to leave that to the whims of the public at the moment." pic.twitter.com/60A8ma69ff

Ok first of all, the Supreme Court doesn’t make law. It issues rulings and in this case it would be overturning a prior ruling which became the ‘law of the land’ in 1973. I would expect Biden to know this and to speak as someone who does, but that ship sailed a long time ago.

Secondly, Biden doesn’t have any authority to put baby murder back in place on his own for the nation. This is the job of either Congress or the states to create laws on the issue. If he tries, and I’m sure he will, the courts will more than likely strike it down.

Lastly, the idea that this decision will threaten other ‘rights’ like gay marriage is just more scaremongering and is NOT true. The pre-ruling by Alito makes that abundantly clear:

“And to ensure that our decision is not misunderstood or mischaracterized, we emphasize that our decision concerns the constitutional right to abortion and NO OTHER RIGHT. Nothing in this opinion should be understood to cast doubt on precedents that do not concern abortion.” 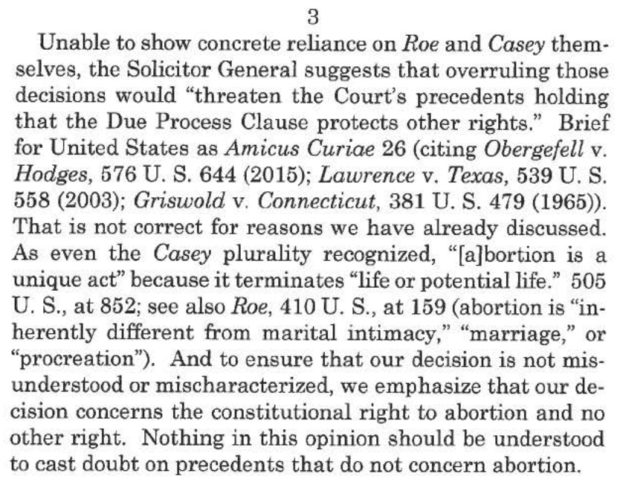 That’s from page 62 in the ruling if you want to look it up in the full initial ruling.

I’ll end this post with two tweets. The first one is just kinda funny, where Biden’s brain once again can’t keep up with his mouth:

BIDEN: "Roe says what all basic mainstream religions have historically included, that the existence of a human life and being is a question." pic.twitter.com/PujN4gaYDw

Tom Elliott replied to this with one word: “Shakespearean”

More importantly, The Great One made a great point about Democrats trying to use this to keep their majorities in the election this year:

So, Democrats will be running on their support for partial birth abortion? That’s how they hope to change the subject and keep a majority?

Exactly, let them run on baby murder. It will probably help Republicans win even greater majorties than already expected.