That is not a made-up headline. It is not from The Babylon Bee or the Onion or the fevered scribblings of a raving lunatic with no tether to reality whatsoever.

Okay well technically it IS that last thing, but only in that it describes Joy herself, because this is an actual thing she said last night.

“I would really like to hear the back-story on who these kids were and how they wound up at a DeSantis event,” she wrote, the implication again being that it was against their will. “Given how anti-Black DeSantis is, using Black children this way is extra sick.”

Like all MSNBC host tweets it has to end with a spurious accusation of racism. 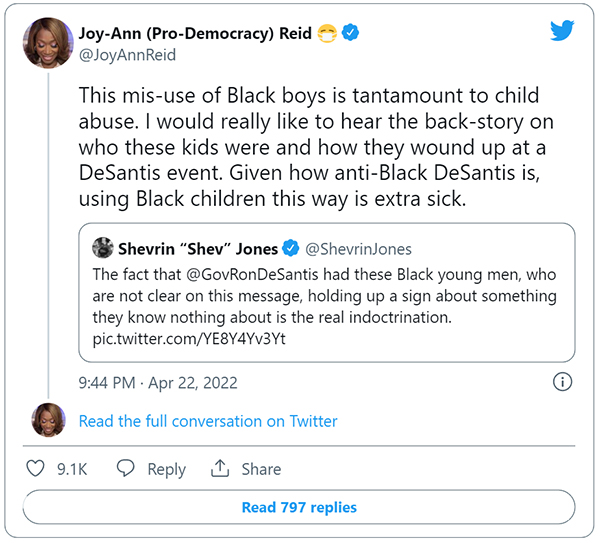 Twitchy points out a bunch of her followers got the message exactly how it was intended to be got, posting these two as prime examples.

There’s also a disgusting tweet from a Florida Democrat in that Twitchy post but I don’t recommend it if you have blood pressure issues.

These people are sick. And on the word actionable, I wonder if false accusations of kidnapping and abuse are actionable, hmm? I suggest the Governor/Future President look into it.