A federal judge has just ordered the release of Christopher Worrell, who was being held in the DC jail after being arrested earlier this year, after a surprise inspection of the facility found what the judge described as deplorable conditions and severe mistreatment of detainees:

DAILY WIRE – Following an impromptu inspection of the D.C. jail, a federal judge has ordered the release of January 6 defendant, Christopher Worrell, over the mistreatment of detainees.

The surprise inspection of the jail by U.S. Marshals took place last month, but the report from the inspection was not made public until Wednesday.

Due to the findings, U.S. District Judge Royce Lamberth said he has “‘zero confidence that the D.C. jail’ will provide the treatment correctly and not retaliate against Worrell,” who has cancer, CNN reported Wednesday.

Lamberth called the jail conditions “deplorable” and “beyond belief,” ordering Worrell transferred immediately to another jail and then released home to start cancer treatment, the report outlined.

Some 400 prisoners are being moved out of the jail after the “deplorable” conditions were uncovered. According to CNN, the Marshals’ report found that water was being shutoff in many cells “for punitive reasons” for days at a time, toilets were clogged, and an inmate who had been pepper-sprayed was “unable to wash the spray off for days, leading to an infection.”

The D.C. Department of Corrections staff were “antagonizing detainees” and “directing detainees to not cooperate with” U.S. Marshals during the inspection, the agency said, and “[o]ne DOC staffer was observed telling a detainee to ‘stop snitching.’”

It’s unbelievable that something like this would happen in this day and age. Unaccountable, abusive control over detainees in the nation’s capital could only happen at a jail holding those arrested in the January 6th riot.

That’s right, I said riot. Not an insurrection.

I could be wrong, but I suspect even child molesters are treated better than this by prison facilities around the country.

I’m glad Lamberth intervened here and hopefully heads will roll over this.

Here’s the full statement from the US Marshals on the DC Jail: 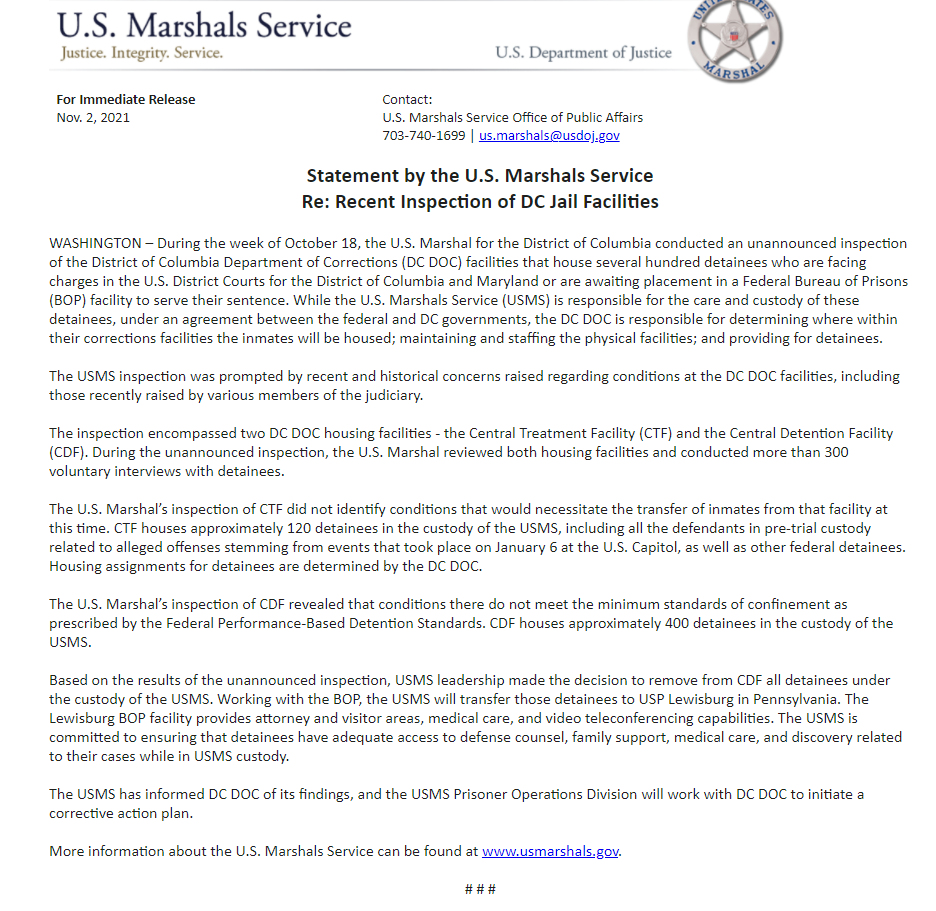