Like other moderate Democrats, Mitch McConnell was put off by Chuck Schumer’s unhinged meltdown in the Senate last night, and wrote a letter this evening on the subject saying that he won’t be helping Democrats out in the future.

You know, because he HAS been helping them, a fact the statement takes as given and understood.

“Last night, Republicans filled the leadership vacuum that has troubled the Senate since January. I write to inform you that I will not provide such assistance again if your all-Democrat government drifts into another avoidable crisis,” McConnell wrote in his letter to Biden.

He wrote that in a “bizarre spectacle” last night, Schumer “exploded in a rant that was so partisan, angry, and corrosive that even Democratic Senators were visibly embarrassed by him and for him.”

That part is definitely true. Some Democrats, like Mitch, were upset and embarrassed, along with any person in America possessed of self-respect and dignity who can recognize the lack of it in others.

“This tantrum encapsulated and escalated a pattern of angry incompetence from Senator Schumer,” Mitch continues. “It was reminiscent of last year when he joined a protest on the steps of the Supreme Court and shouted threats at individual Justices by name.”

He concluded by saying, “I am writing to make it clear that in light of Senator Schumer’s hysterics and my grave concerns about the ways that another vast, reckless, partisan spending bill would hurt Americans and help China, I will not be a party to any future effort to mitigate the consequences of Democratic mismanagement.”

Again highlighting the question of WHY DID YOU DO IT IN THE FIRST PLACE, PAL??? 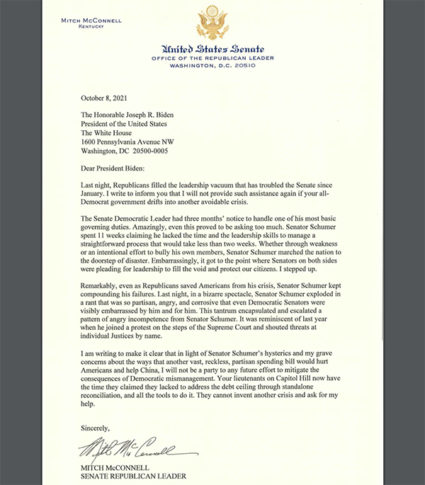 The fact that there are some SWEET burns on that gape-mouthed lackwit Schumer in this letter doesn’t absolve Senator Turtleneck of his malfeasance, but it’s always good to see Dumb and Dumber draw mutual blood, at least.