Man, the Kaepernick thing just kinda imploded today. The NFL is saying that he tried to scam them in order to get video footage and more publicity and outrage. Check out their statement they just released: 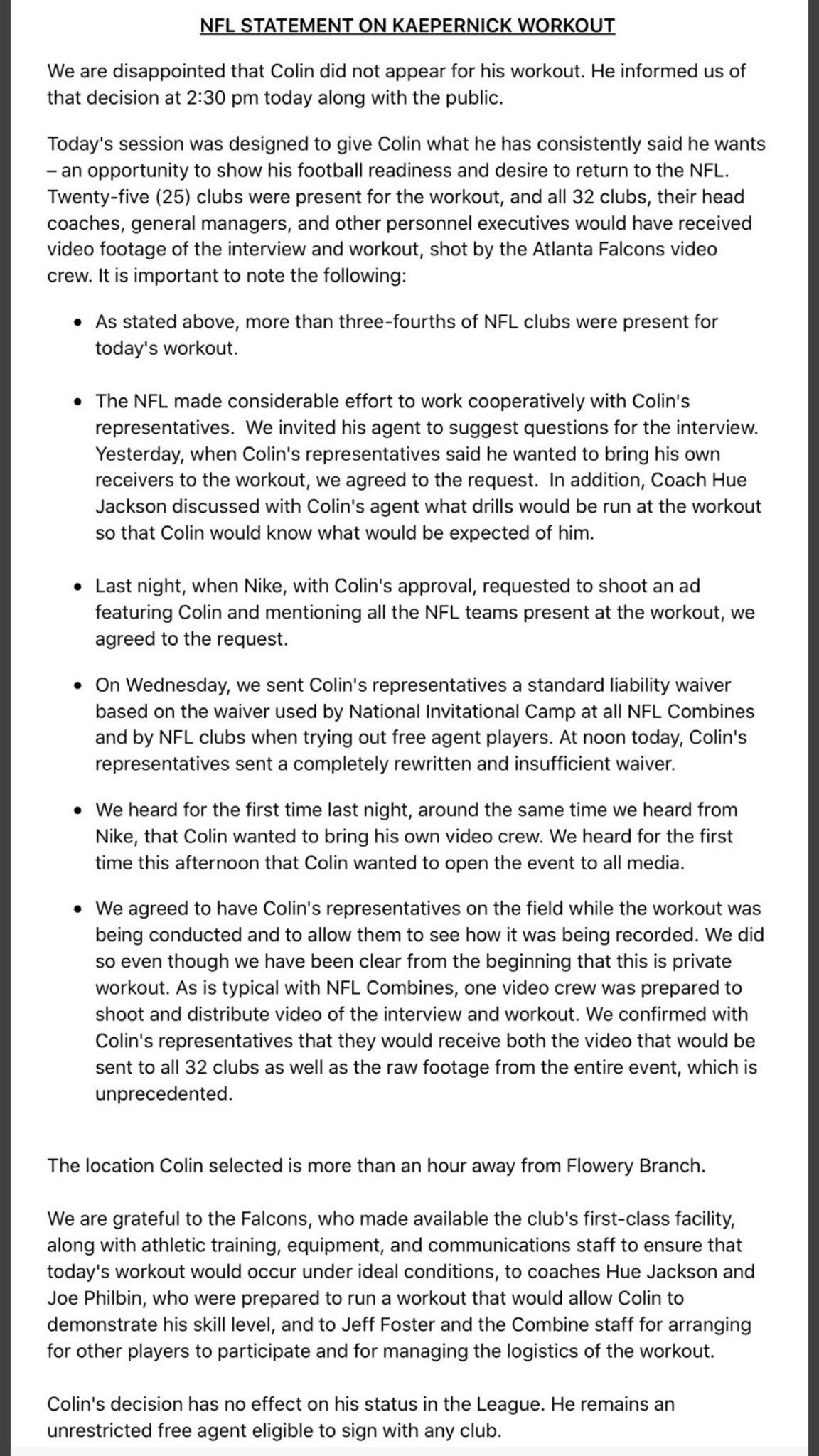 Representatives for quarterback Colin Kaepernick moved and rescheduled his workout for NFL teams Saturday after disagreements persisted with the league over the details of his audition.

The session, as planned by the NFL, was originally scheduled for 3 p.m. at the Atlanta Falcons’ training complex in Flowery Branch, Ga. After continued haggling with the league over the conditions for the workout, Kaepernick’s representatives announced it would be moved to 4 p.m. at another Atlanta-area venue.

They wanted the session open to the media, which the NFL refused, and objected to the version of a liability waiver that the league wanted Kaepernick to sign, Kaepernick’s representatives said.

“From the outset, Mr. Kaepernick requested a legitimate process and from the outset the NFL league office has not provided one,” Kaepernick’s agent, Jeff Nalley, and attorney, Ben Meiselas, said in a written statement.

Nalley and Meiselas also said the league rejected their request to have the originally scheduled workout open to members of the media. The NFL, they said in the statement, also “has demanded that as a precondition to the workout, Mr. Kaepernick sign an unusual liability waiver that addresses employment-related issues and rejected the standard liability waiver from physical injury proposed by Mr. Kaepernick’s representatives.”

Look, I want to be fair to both sides. But listen to how Kaepernick explains what happens:

Powerful statement from Colin Kaepernick after his workout.

"Our biggest thing with everything today was making sure we had transparency with what went on. We weren't getting that elsewhere so we came out here." pic.twitter.com/1ZJl5rSQ6z

Ah, that makes zero sense, homie. How is it so difficult to just have a damn workout with the teams and have it be private? Why does it need to be public? Just what did he think they were gonna do? Assassinate him? LOL! Ugh, it’s all so silly.

Try to make sense of this madness:

A look at Colin Kaepernick throwing deep passes at his workout today. pic.twitter.com/qnDbObj37T

Kunta Kinte —- an African slave in the novel and TV miniseries, “Roots,” who was renamed “Toby” by an American slave owner. He resisted the name and enslavement. @wusa9 pic.twitter.com/xrS7dMFBS6

I’ve heard from various club reps at every level this week. None felt the Kaepernick workout was being handled in a common-sensical manner. The lack of planning and attention to detail created what multiple scouts called a “mess” today in Atlanta.

Kaepernick made a big deal about doing a workout for NFL teams. The NFL set it up for him and 25 teams agreed to attend. At the last minute he insisted on having his own film crew. Because he didnt get his way, he pulled out. This guy doesn't want to play. He just wants attention

Colin Kaepernick works out at a high school in Riverdale, GA in front of media and at least a handful of NFL personnel : https://t.co/XpNK9aMSG9

Listen, it wasn’t the NFL that pulled a switcheroo on Kaepernick, he did it to them. And at the last minute. This really looks like it’s on him.

Everything about this guy just screams “not worth the trouble.” There’s no way anyone is dumb enough to sign him after this. Well, except maybe the Jets.