Kari Lake has just been projected the winner in her race to be the Republican nominee and eventually governor of Arizona.

Here’s screenshots from both Decision Desk HQ and CNN: 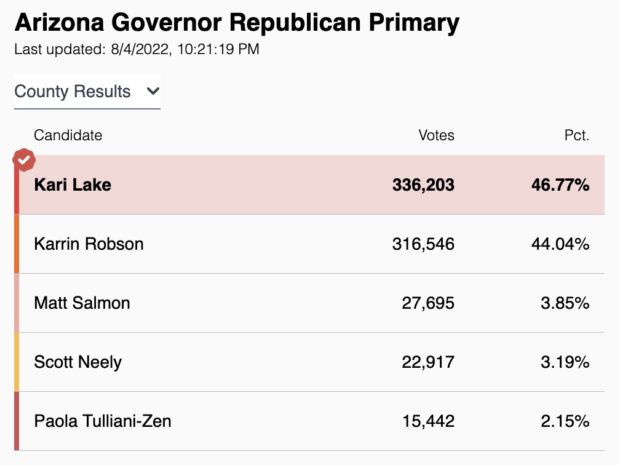 She didn’t just win, she won every county in the state:

We officially won every single county in Arizona. Clean sweep of the State.

This isn’t MY win.
This is OUR win.

Yavapai county has added 1,697 ballots to the R Gov race.

Yavapai estimates 16,231 ballots are left to count, including provisional.

His percentages are wrong based on others I’m seeing. But the important thing is that Lake’s lead is increasing as the race-callers wait to call the race, still saying it’s too close to call.

I’m surprised the race is this close given how much of a lead Lake had in the polls. But the important thing is that she wins and it looks like she’s well on her way to doing that.

I have no idea why it’s taking so long to finish counting votes, but Lake tweeted about it a few minutes ago:

The fences at MCTEC are being covered up so people cannot watch and see what’s going on. (I told you we have eyes everywhere)

We demand transparency.
This is not a good look. pic.twitter.com/5KbceJyx7U

Why is it every time vote counting happens, it’s being done in secret???