Yesterday, President @realDonaldTrump said he wanted to protect suburbs for ALL Americans of ALL backgrounds, but the unconscionably dishonest tweet below omitted the vast majority of his actual quote to make it seem like he was saying the opposite.

Below are the screenshots she added to the tweet, where Yamiche tweeted “A moment to behold. Q: What do you mean by an “invasion” in the suburbs if VP Joe Biden is elected? President Trump: “They’re going to destroy suburbia. And 30 percent of the people in suburbia are minorities. They say 35 percent, but I like to cut it lower.” 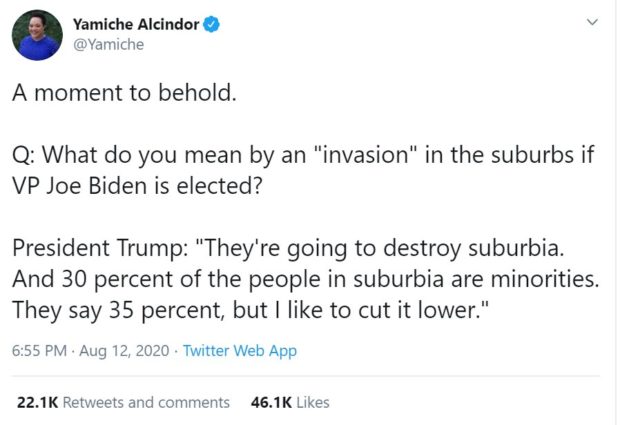 She intentionally made it sound as though Trump wants to cut the number of minorities in suburbia. But that’s not what he was talking about as McEnany demonstrates with Trump’s actual comments:

Clearly Trump was saying that he likes to undershoot the number of minorities in suburbia and say 30% when others are saying it could be as high as 35%, so he doesn’t get in trouble with the fake news media. But apparently it doesn’t matter what he says, because dishonest reporters like Yamiche will change his words to make him say something completely different in order to create phony outrage. It’s evil. And she doesn’t even care because her despicable tweet is still up.