“We’re purely objective journalists! Truly, truly, sir. From the bottom of my heart!” That’s how the reporter started. “Nobody tells me what to say sir!” he said. By the end of the clip, he’s shaking his head in frustration, wearing his mask because he was told to.

After his defiant self-serving remarks about being a pure journalist, he puts on a mask show. Having been outside without the mask, and his cameraman wearing no mask, he puts it on for his on-air report. BUSTED. And the guy with the camera calls him out and it’s amazing.
‘

It’s so great that my first thought is “man I HOPE this isn’t fake.” It’s just so … perfect.

But it’s real. That’s a real reporter, David Kaplan from WTAE in Pittsburg. And he’s caught. The whole SYSTEM is caught.

My favorite part of the whole thing was this tweet. 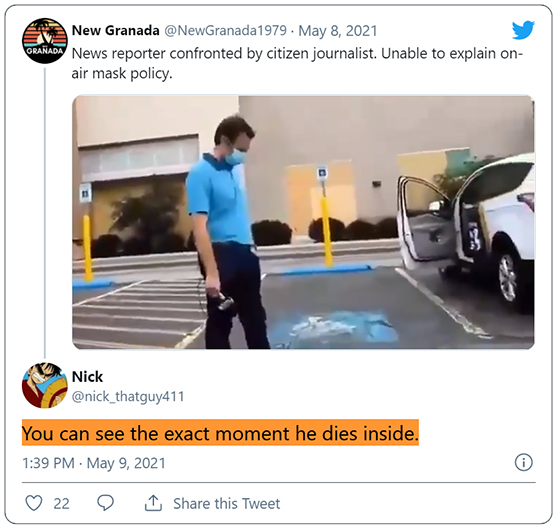