So now Donald Trump isn’t even entitled to attorney-client privilege. That’s the newest violation of the constitution and the “norms” that far-left liberal MSM fake journos and the Democrats (but as always, I repeat myself) spent so much time bitching about.

The FBI stole privileged Attorney-Client info from Trump in Mar-a-Lago raid, as well as material protected by executive privilege, Fox News reports. And President Trump demanded in a TRUTH this morning that they be returned. He asked nicely. I wouldn’t expect that tone to last.

“Oh great! It has just been learned that the FBI, in its now famous raid of Mar-a-Lago, took boxes of privileged “attorney-client” material, and also “executive” privileged material, which they knowing should not have taken. By copy of this TRUTH, I respectfully request that these documents be immediately returned to the location from which they were taken. Thank you!
” 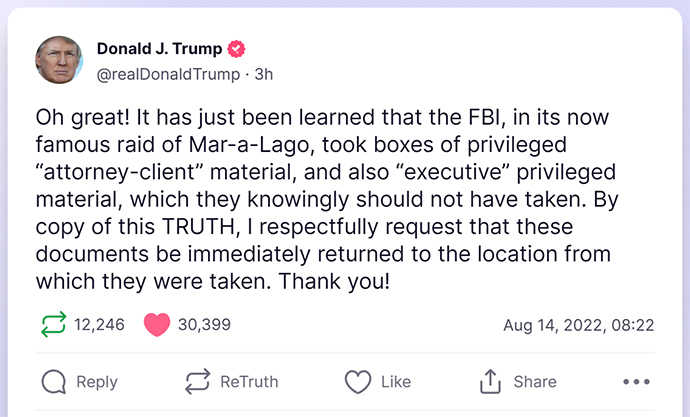 The FBI seized boxes containing records covered by attorney-client privilege and potentially executive privilege during its raid of former President Trump’s Mar-a-Lago home, sources familiar with the investigation told Fox News, adding that the Justice Department opposed Trump lawyers’ request for the appointment of an independent, special master to review the records.

Sources familiar with the investigation told Fox News Saturday that the former president’s team was informed that boxes labeled A-14, A-26, A-43, A-13, A-33, and a set of documents—all seen on the final page of the FBI’s property receipt —contained information covered by attorney-client privilege.

In other words, the FBI broke the law, and are violating the single most basic precept of our justice system.

Which means the FBI broke the law.

We are now well over the edge of the map here, people. But you can guess who doesn’t care at ALL. Correct, the media isn’t even tweeting about it, much less putting it in their news articles or on TV.

Check for yourself. As of 20 past eleven (Dallas time) there’s nothing at CNN, MSNBC, or the lot. No Brian Stelter tweets. No Jake Tapper concern. Nothing but the New York Post and Fox News and the blogs. None of the so called mainstream press.

Because they are part of it.