There’s a lot of reporting today over an interview that Lev Parnas did with Rachel Maddow last night where he claimed that Trump got rid of former Ambassador Yovanovitch over his desire for Ukrainian President Zelensky to investigate the Bidens.

First of all, remember that Lev Parnas was arrested in October of last year for trying to influence a Congressman via a straw donations in order to oust the US Ambassador to Ukraine:

U.S. Attorney Geoffrey Berman: Two men with ties to Giuliani "sought political influence not only to advance their own financial interests, but to advance the political interest of…a Ukrainian government official ho sought the dismissal of the U.S. ambassador to Ukraine." pic.twitter.com/yKIb6vaZw8

Chuck Ross from the Daily Caller posted this clip from the interview with Maddow. Parnas is claiming that Trump fired Yovanovitch solely because she was in the way of getting Zelensky to investigate the Bidens. But Chuck Ross notes this is very unlikely:

Lev Parnas claims the effort to get rid of Yovanovitch was solely to get her out of the way so investigations of Biden could be opened.

Except Parnas was pushing for Yovanovitch's removal way back in May 2018, and his indictment says he did it at direction of Ukrainian official pic.twitter.com/3RHlLrwCnk

To further make this point, Ed Morrissey this morning posted a screenshot from the indictment against Parnas, which shows that he was actively trying to oust Yovanovitch in 2018, well before the Biden thing ever happened: 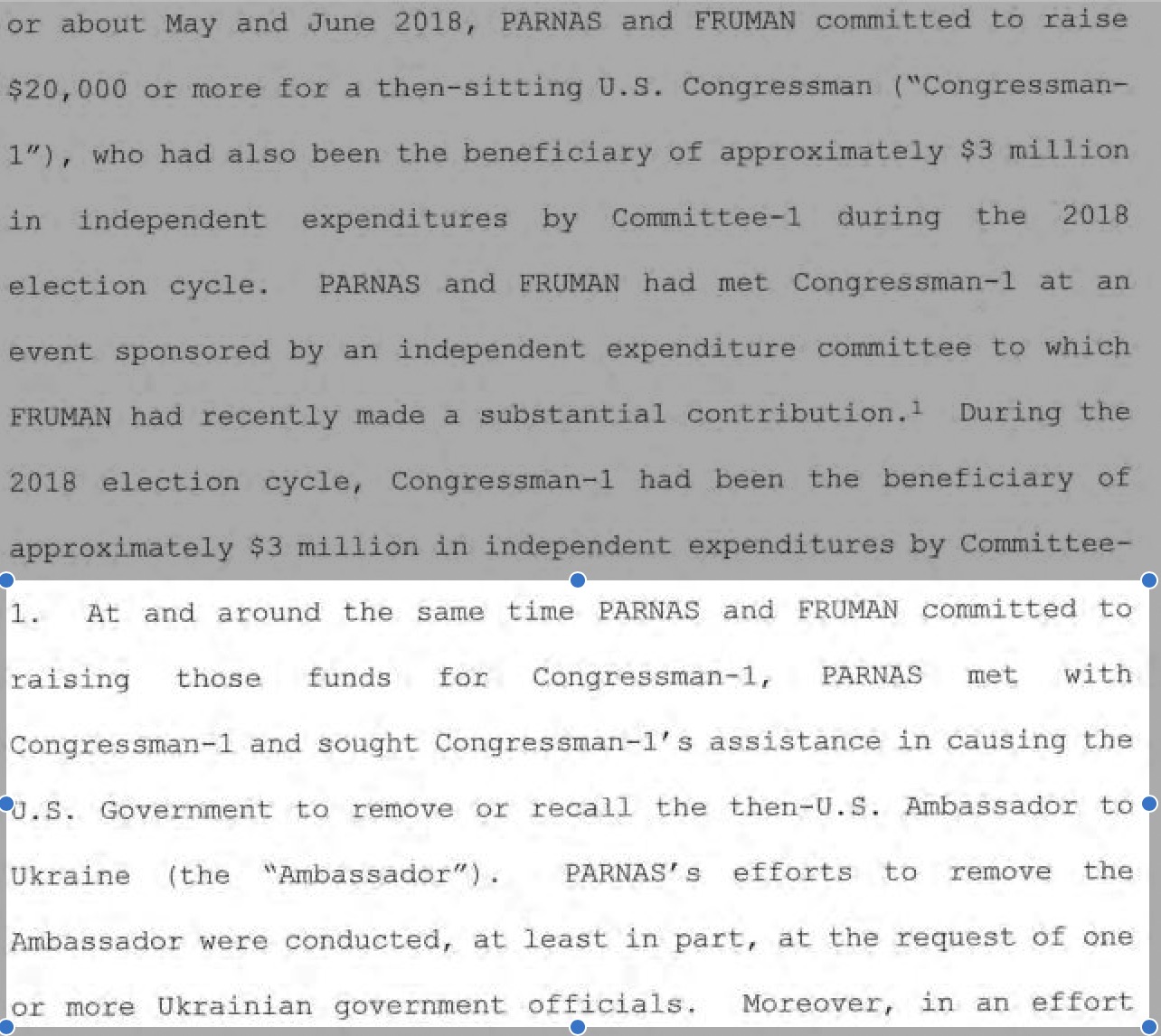 Lev Parnas himself put his attempts to get Yovanovitch fired in April of 2018:

WaPo has reported that Lev Parnas has claimed that in April 2018, he told Trump that Marie Yovanovitch was bad-mouthing him and should be fired. Doesn't square with Parnas' new claim that he did everything at Trump/Giuliani's behest. https://t.co/QtW6Nv3S9g pic.twitter.com/nMLk8t9rqz

As Ed Morrissey points out, the indictment against Parnas is crystal clear that this straw donor scheme was solely to buy influence to get Yovanovitch ousted. The question is why didn’t Maddow bring any of this up in the interview? When Parnas as arrested in October it was HUGE news in the media. Surely Maddow covered it and you’d think she’d bring this point up with Parnas.

Furthermore, as Andrew McCArthy pointed out yesterday, Parnas wants to testify in the impeachment trial so that the prosecutors in the Southern District of New York will give him immunity. McCarthy notes that if Parnas testifies without immunity he will convict himself, so he must have immunity before he testifies. So in effect Parnas is trying to leverage the impeachment to save his own butt, which gives him even more reason to lie to Maddow about the Biden fiasco.

Finally, I’ll note that last November Giuliani told Fox News that what Lev Parnas said and did for him was completely appropriate and normal. However he adds that what Lev Parnas has been saying recently, especially in regards to meeting with Trump in December of 2018 where Trump told him to do a bunch of stuff, is completely and provably untrue. He says five witnesses who were there will testify that this meeting never occurred. In short, Giuliani says it’s clear that Parnas is trying to make a deal with his prosecutors.

The other big thing Lev Parnas said in his interview with Maddow is also provably false as well, which was that Trump threatened to withhold all aid from Ukraine if it did not publicly announce an investigation into the Bidens. Not a single witness in the phony House impeachment Schiff Show testified to this. In fact they all said the opposite, that Trump didn’t make this threat and that the Ukrainians didn’t even know the aid was being held in the first place.

It sounds like Lev Parnas is very untrustworthy at this point and is just making stuff up to get himself immunity and save his own butt. Democrats, both in the media and on Capitol Hill, don’t really care as long as they can use it to hurt Trump’s reelection efforts.