A man who police say was a deranged sex addict with a grudge against several massage parlors and a past with those locations, went on a horrific killing spree this week, murdering 8 people. An tragic and evil event that decent people from every walk of life naturally condemn and reject. And which the left and Democrats naturally, as they do, are trying to use as a club against Republicans.

Starting with MSNBC and Twitter (what’s the difference), the killing — which police say they do not believe was motivated by some broad general racial animus or somehow driven by people saying out loud the fact that the virus originated in China, and instead was motivated they believe by his past association with the establishments and his mental and moral decrepitude — was linked to “rhetoric” from Republicans and, of course, you guessed it, Donald Trump.

Today the White House had flags across the country lowered to half mast and Congress already started hearings about how the GOP is responsible for the killings, even though the police and FBI haven’t even finished investigating the crime. Based apparently on news reports from outlets like MSNBC and CNN, which directly attacked police as racist incompetents themselves, the Democrats in the House set about claiming that saying “Wuhan flu” is the same thing as pulling the trigger.

Rep. Chip Roy from the Great State of Texas expressed his own dismay and anger over the attacks, saying that he wants the killer brought to justice, harshly to justice, and even THAT set Democrats off.

He said that he wants to take out the bad guys. And the media, NATURALLY, turned it into somehow him being even more racist, because of the reference to hanging criminals.

I won’t even show you the majority of the absolutely DISGUSTING things that people said about it. But this one tweet from Charlotte Clymer is a good example. 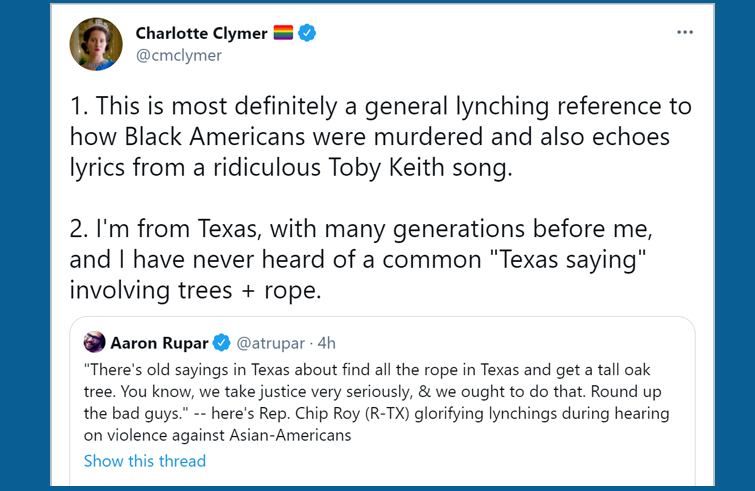 Obviously, that’s ludicrously stupid. Ever heard of Judge Roy Bean, lady? Hanging was used as the primary method of execution for ANYONE sentenced to death in Texas all the way up to 1924. Ever seen a western, lady? Ever read A BOOK??

But they know it’s dumb, they just wanted to add to the pile-on. Can’t get Chip Roy for being anti-Asian? Claim he’s saying kill black people while talking about executing the murderer of Asian-Americans. That’s the ploy. The SCAM.

And to sell that scam, they trot out Rep. Grace Meng of New York based solely on her racial identity, to claim that saying the virus came from China puts her grandkids at risk. Cue fake tears.

The victims and families should be saddened and outraged by this crass, gross, opportunistic capitalizing on the murder of their loved ones by a cynical and despicable Democratic party that has no bottom to low they’ll stoop in their greedy quest for power.