The Pinellas County sheriff’s office announced the arrest of a man dressed in black block and armed with a pipe bomb at a Jan. 6 gathering at a courthouse in Florida last week.

The gathering was a protest of the continued incarceration of an individual facing charges related to the Jan. 6 capitol riot.

“At approximately 7:24 p.m., deputies in the area observed a male, later identified as Smith, dressed in all black clothing, a face covering, and carrying a black backpack, running away from the direction of the protest,” it says.

Here are some news reports. If you’re wondering why they are all local it’s because cable news hasn’t bothered with the story. Each of them is missing an important detail. Guess what they leave out! Go ahead, guess!!

At a press conference, police noted that he was dressed all in black and was carrying a black backpack, as well as a “checklist” detailing his clothing/armor/gear, etc. They found many more explosive devices in his home. He’s refusing to speak. The police said he seemed to be “fleeing” something when they came on him.

Watching the above reports you might not be sure what the guy was up to. Every one of them says there’s no indication of motive. Watching that last one, you might even think he was ready to blow stuff up on BEHALF of the Jan. 6 rally, rather than against them.

But then, that’s probably because of the part from the Sheriff’s presser that the press left out. Check it out.

“Also in the backpack was a black helmet,” says Sheriff Bob Gualtieri. “The black helmet with colors on it and logos that resemble logos that have been seen in protests by groups in Oregon and in other places in the country.”

“According to Smith’s family he had been in Portland, Oregon and returned several months ago,” he said.

THE GUY HAD THE GEAR OF BLACK BLOC PROTESTERS AND HAD BEEN THERE WITH THEM IN PORTLAND.

In fact, the helmet has something very specific on it, which The Blaze goes into here.

You wouldn’t even know there was any CONNECTION to Antifa by watching those reports.

Just imagine that this had been a BLM protest. Imagine the guy fleeing and arrested had been found with “helmet with colors on it and logos that resemble logos used by MAGA groups and had spent several days in Washington D.C. in January of last year.”

That would be the ONLY reporting on it, and it would not be RELEGATED to local news. It would be a TOP STORY.

But guy busted with pipe bomb and Antifa gear? You get this: 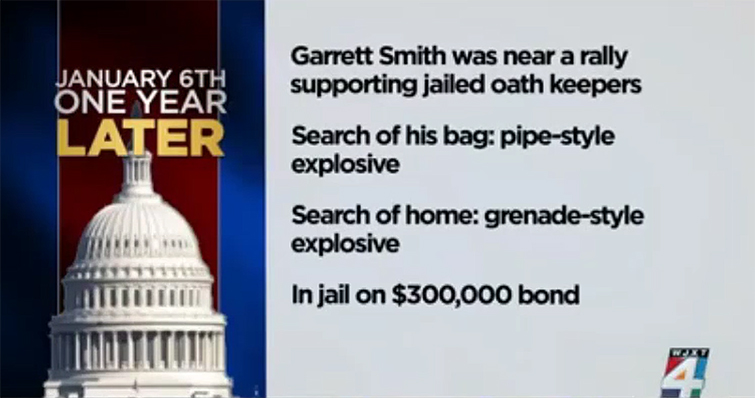 That’s what the tech giants like to call “misleading,” wouldn’t you say? But par for the course in our press.

Hey do us a favor and tell people about this article? Really think this should be a bigger deal.