Joe Manchin has been trending all day for committing two of the biggest crimes in all of Democratic politics. 1) he doesn’t want to federalize something. 2) He says being bipartisan is good.

Those are the forbidden points of view above almost all others. And his oped that went live this morning has him being tried, convicted, tarred, and feathered for it.

“Not a Republican” was trending on social media sites and search enginges all day. Now it’s just his name. Later it will be an insult probably. He’s public enemy number one because everything that happens is decided by the press and the press are Democrats, so naturally he’s a racist now who hates voting “rights.”

The right to vote is fundamental to our American democracy and protecting that right should not be about party or politics. Least of all, protecting this right, which is a value I share, should never be done in a partisan manner.

During my time as West Virginia’s secretary of state, I was determined to protect this right and ensure our elections are fair, accessible and secure. Not to benefit my party but all the people of West Virginia. For example, as secretary of state I took specific actions to establish early voting for the first time in West Virginia in order to provide expanded options for those whose work or family schedule made it difficult for them to vote on Election Day. Throughout my tenure in politics, I have been guided by this simple philosophy — our party labels can’t prevent us from doing what is right.

Unfortunately, we now are witnessing that the fundamental right to vote has itself become overtly politicized. Today’s debate about how to best protect our right to vote and to hold elections, however, is not about finding common ground, but seeking partisan advantage. Whether it is state laws that seek to needlessly restrict voting or politicians who ignore the need to secure our elections, partisan policymaking won’t instill confidence in our democracy — it will destroy it.

As such, congressional action on federal voting rights legislation must be the result of both Democrats and Republicans coming together to find a pathway forward or we risk further dividing and destroying the republic we swore to protect and defend as elected officials.

It is not what I would have said. It’s probably not what you would have said. It gives too much credit where not due, not enough where due, and accepts framing from Democrats about what is at stake here — which is that when Democrats say “voting rights” what they mean is “the right for democrats to control everyone’s votes.”

And the fact that this is not what he is saying is THE POINT here. That op-ed is as mild as it gets. And plus he’s saying he would vote for the other (worse?) bill the John Lewis Voting Rights Advancement Act.

AND YET THEY ARE LOSING THEIR MINDS. 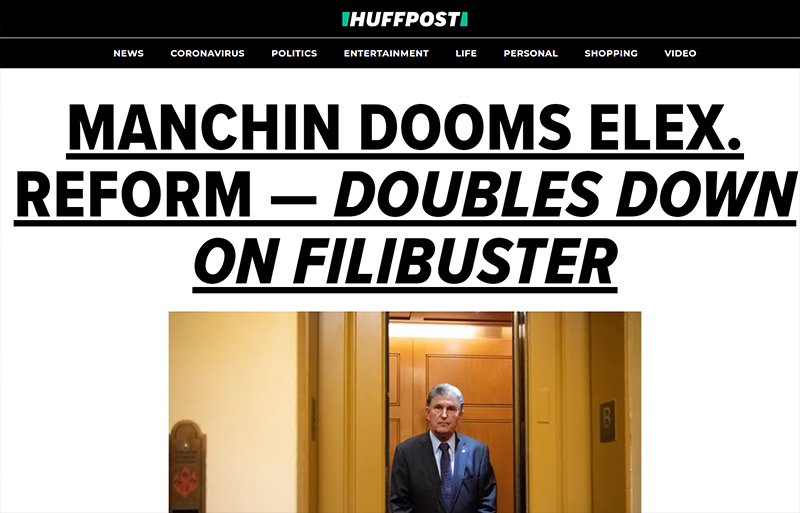 I’m not even going to post the crazy tweets this time. You can imagine what’s being said on that hellsite.

@Sen_JoeManchin There will be consequences for your attitude. Standing in the way of MILLIONS of people's right to vote is UnAmerican. pic.twitter.com/cTSvWcaqMh

We know why this is the case. It’s because of what his opposition means, and how he means to do it.

It has been said by much wiser people than me that absolute power corrupts absolutely. Well, what I’ve seen during my time in Washington is that every party in power will always want to exercise absolute power, absolutely. Our founders were wise to see the temptation of absolute power and built in specific checks and balances to force compromise that serves to preserve our fragile democracy. The Senate, its processes and rules, have evolved over time to make absolute power difficult while still delivering solutions to the issues facing our country and I believe that’s the Senate’s best quality.

Yes, this process can be frustrating and slow. It will force compromises that are not always ideal. But consider the alternative. Do we really want to live in an America where one party can dictate and demand everything and anything it wants, whenever it wants? I have always said, “If I can’t go home and explain it, I can’t vote for it.” And I cannot explain strictly partisan election reform or blowing up the Senate rules to expedite one party’s agenda.

See it’s not about the voting rights bill at all. Those bills, both of them, are just leverage to get people to support Democrats ending the filibuster. Why?

BECAUSE THEY WANT ABSOLUTE POWER. They’re already corrupted absolutely, they did that part ages ago. Now they want the absolute power.

That’s why they are mad. Just like Manchin is saying here. They want NO opposition. They want TOTAL control. That’s what this is for.

Still, it’s pretty entertaining watching them all go horse hopping mad over this. Nothing like Democrat cannibalism to start your day.