This is the worst thing I’ve seen in a long time. It is the brutal murder of two neighbors in Pennsylvania after they got into an argument over snow removal. The man who shot them killed himself when police arrived.

The story first from NBC News:

Prosecutors said a man in Pennsylvania shot and killed a couple in a murder-suicide over a snow removal dispute on Monday, the same day a major winter storm dumped more than 30 inches of snow in parts of the Northeast.

Jeffrey Spaide fatally shot his neighbors, James Goy and his wife, Lisa Goy, before killing himself on Monday morning when officers were called to West Bergh Street in Plains Township, about 15 miles southwest of Scranton, according to the Luzerne County District Attorney’s Office.

Shortly before 9 a.m. on Monday, officers responded to a report of shots fired when they found the bodies of the Goys on the street, prosecutors said. Law enforcement officials said they later heard a gun fire from Spaide’s house. Authorities later determined this to be his self-inflicted gunshot wound, according to prosecutors.

Surveillance video revealed that Spaide and the Goys were involved in disputes before the deadly encounter, prosecutors said.

The video shows that the Goys shoveled snow from their parking spots, pushed it across the street and threw it onto Spaide’s property. After Spaide asked the couple to stop throwing snow onto his property, the neighbors got into an argument where they appear to have exchanged obscene gestures and expletives.

Prosecutors said James Goy threatened Spaide and cocked his fist, prompting Spaide to retreat into his home and return outside with a pistol.

While the Goys acknowledged he had a gun, prosecutors said they continued to shout names at him from the middle of the street. Spaide opened fire and shot the Goys before returning to his home to get another gun to deal the killing blow, according to prosecutors.

After killing his neighbors, Spaide went back inside his home where he shot himself as police pulled up to the scene, prosecutors said.

That’s pretty much what happened. The man actually shot them with a handgun, left them lying in the street, and then goes and gets a rifle and shoots them again to make sure they are dead, before walking back to his home.

Below is the video that was posted on Twitter a few minutes go. But I warn you, it shows the brutal murder of two people and if you are sensitive to that, DO NOT WATCH IT.

The person who posted this on Twitter is Cory Provost, District Leader, 58th NYS Assembly District. And his reason for posting it is gun control: 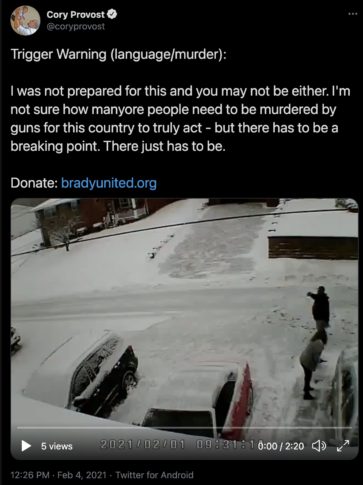 Once again, this is not a gun control issue. This man was a freaking maniac who could have just as easily stabbed them as he did shoot them. He must’ve had mental issues of some kind to lose control like that because this is not normal.

It’s not the gun’s fault, it’s the maniac with the gun that’s the problem. But that doesn’t matter to the left. They hate guns and would rather use something like this to justify taking them away from law abiding gun owners under the premise of keeping people safe.