The despicable St. Louis prosecutor, Kim Gardner, fundraised off of her prosecution of the McCloskeys in order to get reelected. And now the attorney for the McCloskeys is asking the court to disqualify her from the case:

DAILY CALLER – Attorneys representing Mark and Patricia McCloskey, the St. Louis couple who displayed firearms after a group of protesters broke a gate and approached their private property, want St. Louis Circuit Attorney Kim Gardner disqualified from the case after she cited her prosecution of the pair in a fundraising email for her re-election campaign.

The McCloskeys’s attorneys included in Wednesday’s motion two fundraising emails from Gardner’s reelection campaign that clearly referred to the McCloskey case, according to court documents reviewed by the Daily Caller News Foundation.

“You might be familiar with the story of the couple who brandished guns during a peaceful protest outside their mansion,” a July 17 campaign email states, according to court documents.

The email went on to say that “President Trump and the Governor are fighting for the two who pointed guns at peaceful citizens during the Black Lives Matter protests” and later included a request for campaign donations, the court documents show.

“Ms. Gardner, via her campaign mailers, linked the criminal proceedings against [the McCloskeys] to her personal, financial and political interests,” Joel Schwartz, the couple’s attorney, wrote in the motion Wednesday.

“The standard for disqualification of a prosecutor is the same as that for a judge. A prosecutor (and a prosecutor’s offie as a whole when appropriate), should be disqualified where a reasonable person would have factual grounds to find an appearance of impropriety,” Schwartz added in Wednesday’s filing.

“Here, a reasonable person with access to all the facts would find that there was at least the appearance of impropriety, in that Ms. Gardner’s decision may have been affected by her personal, political, financial, and professional interests, and that her neutrality, judgment, and ability to administer the law in an objective manner may have been compromise,” he continued.

Below are the two emails she sent to raise money off of her prosecution of these law abiding citizens (click to enlarge): 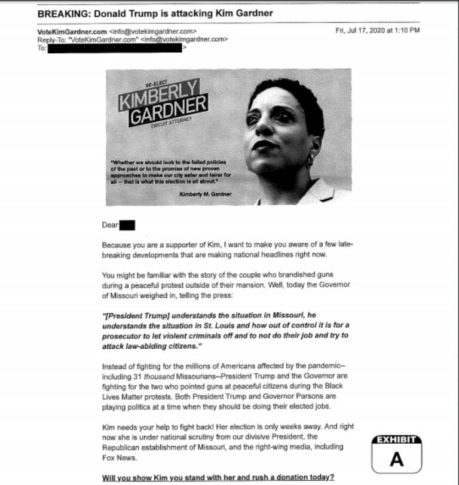 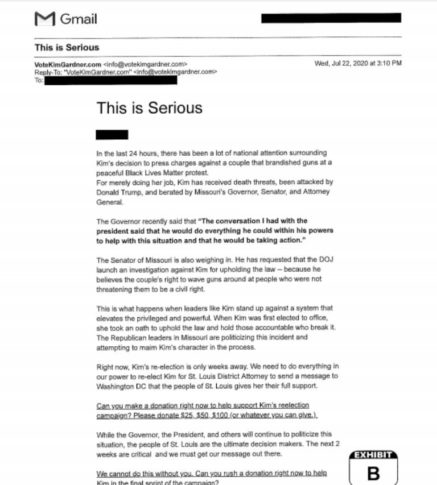 In related news, it was also revealed that Gardner failed to disclose vacations that she took which were paid for by activist groups:

DC EXAMINER – The St. Louis prosecutor responsible for the charges filed against Mark and Patricia McCloskey, the couple who made headlines when they brandished weapons to protect their home from protesters, reportedly failed to disclose vacations she had taken that were paid for by activist groups, as required by law.

“When something isn’t reported, the public has a right to ask, ‘Well, why wasn’t it?’” said Patrick Ishmael of the Show-Me Institute, a Missouri think tank. “Elected officials have an obligation to be transparent, and that’s especially true related to their duty because the public wants to know their officials are working for the interest and not someone else’s.”

Every elected official in St. Louis is required by law to disclose travel no matter if it was funded by public or private dollars. Missouri also has statewide laws that require disclosures in some cases. Gardner reportedly did not disclose any trips in 2018 or 2019 despite taking trips funded by a liberal organization called Fair and Just Prosecution, which has lauded her decision to prosecute the McCloskeys after they brandished and pointed weapons at protesters who broke into their private neighborhood last month.

I’m sure this surprises no one. She’s a corrupt prosecutor through and through and her emails above prove how political this prosecution really is, which is apparent to anyone who isn’t a partisan leftist hack.