That’s not how THEY explain it, but that’s what it is. That’s how it will operate. Anyone with two brain cells to rub together and a working memory of longer than four weeks has heard this song plenty of times.

Breitbart points out that, as Reuters first reported and other outlets are trying not to draw attention to, the Biden administration “is working with Facebook, Google, and Twitter to target ‘COVID misinformation’ and overcome ‘vaccine hesitancy'” apparently. 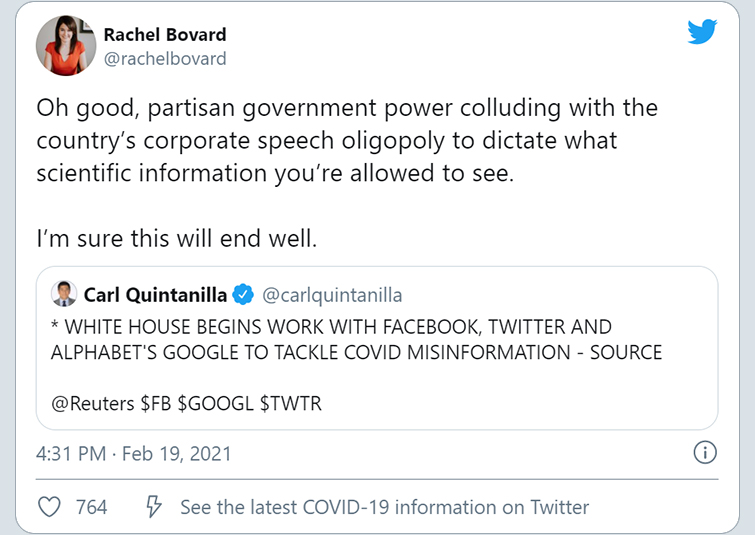 The White House’s direct engagement with the companies to mitigate the challenge has not been previously reported. Biden’s chief of staff Ron Klain has previously said the administration will try to work with Silicon Valley on the issue.

“Disinformation that causes vaccine hesitancy is going to be a huge obstacle to getting everyone vaccinated and there are no larger players in that than the social media platforms,” said the source, who has direct knowledge of the White House’s efforts.

“We are talking to them … so they understand the importance of misinformation and disinformation and how they can get rid of it quickly.”
The Biden White House is especially trying to make sure such material “does not start trending on such platforms and become a broader movement,” the source said.

Y’all can expect them to just stick to disinformation based purely on facts and keep it specific to this one topic area, and not grow it into some cooperative effort between a partisan Democrat administration and a partisan Democrat tech industry to monitor and censor all speech. It’s not like they’d try to purge anyone. Of course.