Police in Philadelphia are seeking the public’s cooperation in identifying a group of black teenagers who beat an elderly black man so severely that he died, and have released photos and video for that effort. And a $20,000 reward.

NBC Philadelphia reports that the victim, James Lambert, “died the day after a group of young people beat him with a traffic cone.”

He was crossing the street.

On Friday, PPD released video on YouTube that shows the deadly attack on the 73-year-old Lambert. They said those responsible appeared to be three girls and four boys believed to be in their early to mid teens.

The first young person to attack Lambert can be seen on video striking the man — who is blurred in the video — with a traffic cone as he walked away from the group to the other side of the street. A short time later, another young person can be seen picking up a cone an throwing it at the man.

Lambert then moves along the sidewalk and is chased down by a young person holding a cone over her head.

“The teens struck the victim several times with objects, knocking the victim to the ground causing injuries to his head,” police said in a web post. “The victim was transported to the hospital where he died of his injuries the following day.”

The police released this reward poster along with the video below it. CONTENT WARNING. 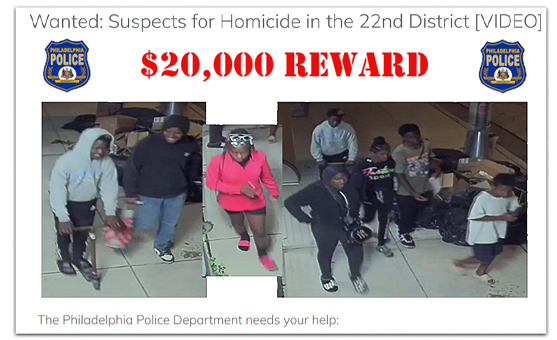 WATCH: 7 teens beat & killed a 72 year old man on Cecil B. Moore Ave two weeks ago this morning. 3 girls & 4 boys, used a traffic cone as a weapon. The man fell, hit his head & @phillypolice say he died the day after the 2:38 am attack on June 24th 1/2 ⁦@FOX29philly⁩ pic.twitter.com/4vmfGqOpp5

This part from NBC 10 is brutal.

Later, the young people appear to have gathered again. One teen is then seen acting out what appears to be a stumbling person.

For me none of this comes as a surprise. America’s cities are sinking into anarchy, and Democrats think defunding the police is a solution. And besides regular crime and gangs, our streets are also subject to roving bands of Antifa and BLM at any time, who can chase people at will, pull them from vehicles and beat them without consequence, attack diners outside of restaurants over nothing. Gangs of privileged white outrage junkies can invade the front lawn of Supreme Court Justices and threaten their lives at restaurants. And people like MSNBC’s Tiffany Cross go on the air and tell the criminals they are justified in their actions because of historic wrongs, or gender inequity, or income disparity or whatever. And Biden and his lackeys go before the nation and call of that “Democracy”.

There is only one direction such a dark path leads.

Feel free to politely discuss that or anything else below..