The Democrats and the media and the left and their pet NeverTrumps have been running around AHA!-ing over the fact that the man who shot and killed a pro-Trump mostly peaceful demonstrator in Denver yesterday was working as security for a local reporter. Their argument is that therefore it’s not an Antifa thing.

UPDATE: Matthew Dolloff (DOB 03-07-1990) is being held for Investigation of First Degree Murder in connection w/the shooting that occurred yesterday at 10 W. 14th Ave. This remains an active investigation; any additional updates will be released as it becomes available. #Denver https://t.co/1Y7Yw7stL0 pic.twitter.com/Va3Lvc1CwT

Two Trump supporters have been murdered in recent weeks. Last night one was killed by a media outlets hired security. Where is the media coverage as there was with Kyle Rittenhouse?

That’s a great question actually, and the media and left will answer that they don’t have to cover it because it’s not ANTIFA or because it’s local news or whatever other excuse that wouldn’t amount to a hill of beans if the parties were reversed. I mean can you imagine if…

Can you IMAGINE if a cop shot an Antifa/BLM protester for spraying mace? Because they do that all the time to the cops. When they aren't throwing molotov cocktails at them.

Anyway we now know a LOT more about this “reporter” Kyle Clark and his “security” guard who is being investigated for homicide after shooting a man in the face at point blank range.

Let’s start small, with this find from Ian Miles Chong. 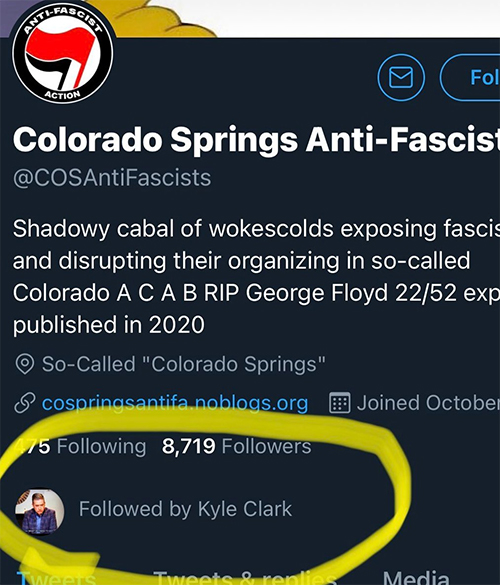 Not definitive, but sure was interesting right after it happened. But a lot more has come out since. A LOT.

“He was a security guard!”

All you deniers are proving is that the media *is* AntiFa and vice versa.

Today a “security guard” for 9 News shot and killed a conservative.

I wonder what sort of security these folks hired? https://t.co/9byIWxHjmy

There’s plenty more on Clark. But how about Matt Dolloff, the shooter? Well…

Yesterday in Denver a Conservative was executed by Matt Dolloff @DenverPolice claim he has no connections to ANTIFA, but that’s not what the evidence says.

This is a thread EXPOSING the truth behind the murder. pic.twitter.com/mxE5VqPsmi

He had a very extensive past of Activism and speaking out against corporations and the police.

He’s been heavily involved in #Occupy which later pushed members to ANTIFA. pic.twitter.com/G9eT1kZ1jl

So the Denver @9NEWS security shooter, Matthew Robert Dolloff, now arrested for murder has quite the Facebook post history. From [email protected] the Police (FTP), to sharing Occupy Denver/ Democrats, to his [email protected] Trump.
What I can’t find is any kind of security/police/military background. pic.twitter.com/oPtb2YSpR3

LITERALLY an Occupy Wall Street guy. Not to mention BLM and Antifa DIRECTLY:

Matt is a registered Democrat.

Not just a Democrat, but a Socialist.

His love for Bernie runs deep, deep enough to have a YouTube playlist dedicated to him. pic.twitter.com/67g5bhfT8c

As you see, past posts from his Facebook show signs of early radicalization, anti-trump and anti-cop rhetoric.

Pulled from his Twitter following, he is a far-leftist with public ties to Occupy as well as… ding ding ding— ANTIFA!

He also has a Space Invaders tattoo, a common logo used among ANTIFA.

There are no coincidences….. pic.twitter.com/tkO55UuhKo

Question: if @4Chan can figure out Denver shooter Matt Dolloff was a radical, militant leftist sporting a pro-Antifa tat, why couldn't @DenverPolice?

But even if you left all the mountains of evidence that this “security” person and his “journalist” ward are fully Antifa, there’s the tiny little inconvenient fact that what he did WOULDN’T BE JUSTIFIED ANYWAY.

This tells a story. pic.twitter.com/IQsRk43y4J

This was all happening while the guy in the Black Guns Matter shirt was agitating the crowd. The shooter likely tried to intervene somehow and got slapped as a result, at which point the rest happened.

Getting slapped is not justification for shooting someone in the head.

You wouldn’t think you had to say this but apparently it’s necessary.

He’s being investigated for murder. Why would it be murder? Because he had intent. And he had that because he had hate. A LONG documented HATE for Trump, Trump supporters, capitalism, conservatives, patriotism, and the police. He came ready to kill and that’s what he did.

The press can try to spin all they want, but we know what happened here. Dolloff is in custody for it. Fake reporter Kyle Clark should be there with him, or at least be answering questions.

I’ll leave y’all with this.

This is the Trump supporter who was shot & killed in Colorado tonight. pic.twitter.com/SwkI1GJAsf

City Of Denver: Matthew Dolloff Not Licensed To Be A Security Guard https://t.co/qnmSjUlLot pic.twitter.com/Jz5eeRoCbt

Well what do ya know.