The Mueller report is finished. Complete. Turned in for a grade. It has been submitted to Attorney General Barr and the President’s attorneys have released a statement.

“We’re pleased that the Office of Special Counsel has delivered its report to the Attorney General pursuant to the regulations,” reads the statement from Rudy Giuliani and Jay Sekulow. “Attorney General Barr will determine the appropriate next steps.”

Barr will be offering a summary of the findings to top lawmakers over the next few days. What we know is it didn’t come with recommendations for ANY indictments.

Here is Barr’s letter to Congress: 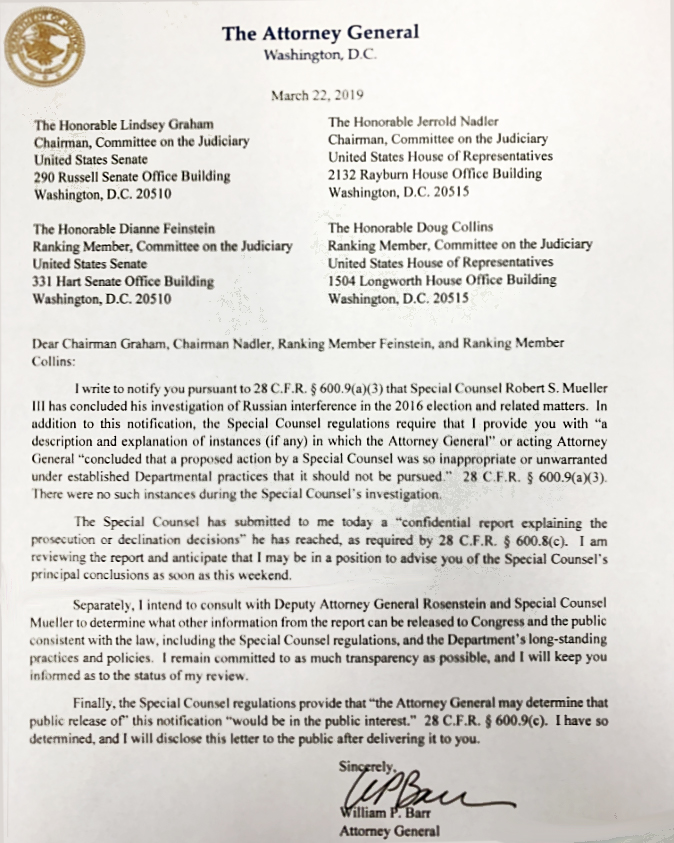 ABC News reports what sources say the President is saying about it.

Sources who have spoken to the President tell @ABC News his initial reaction to today’s news is “glad it’s over”.

What’s that? What’s the word, you say? Oh yes, about that…

The next steps are up to Attorney General Barr, and we look forward to the process taking its course. The White House has not received or been briefed on the Special Counsel’s report.

UPDATE II: There’s some waffling about whether it’s no recommendations for further indictments or no more indictments, or that maybe there are sealed indictments people don’t know about.

To be clear: There Are. No. Sealed. Indictments. Per law enforcement official who knows. https://t.co/SMfWv8CGEK