Arizona’s Attorney General sent a letter to AG Merrick Garland over his comments last week about the Maricopa audit and vowed to defend federalism and fight Garland’s interference of the audit:

DC EXAMINER – Arizona’s attorney general today warned the Biden Justice Department to back off its criticism of the state Senate’s audit of the Maricopa County 2020 vote, charging that it was giving into “hysterical” liberal Trump haters.

“My office is not amused by the DOJ’s posturing and will not tolerate any effort to undermine or interfere with our State Senate’s audit to reassure Arizonans of the accuracy of our elections,” wrote Attorney General Mark Brnovich to Attorney General Merrick Garland.

“We stand ready to defend federalism and state sovereignty against any partisan attacks or federal overreach,” he added.

Garland last week mocked election audits like those in Maricopa County. “Many of the justifications proffered in support of these post-election audits and restrictions on voting have relied on assertions of material vote fraud in the 2020 election that have been refuted by law enforcement and intelligence agencies,” he said.

But in the new tussle over the audit of former President Trump’s loss, Brnovich said it was Garland’s argument that should be mocked as well as a letter from the department’s Civil Rights Division.

“Your comments followed a May 5 letter from Pamela Karlan of the Department of Justice’s Civil Rights Division, on the subject of the Arizona Senate’s oversight of the Maricopa County audit. This letter appeared more interested in supporting the hysterical outcries of leftist pundits on cable television, rather than the rule of law,” wrote Brnovich, who last week announced his bid for the Senate.

In his announcement Brnovich said that in Washington he would champion states rights as he has at home. He hopes to win the GOP primary and face Democratic Sen. Mark Kelly.

Wrote Brnovich, “Arizona will not sit back and let the Biden administration abuse its authority, refuse to uphold laws, or attempt to commandeer our state’s sovereignty.” 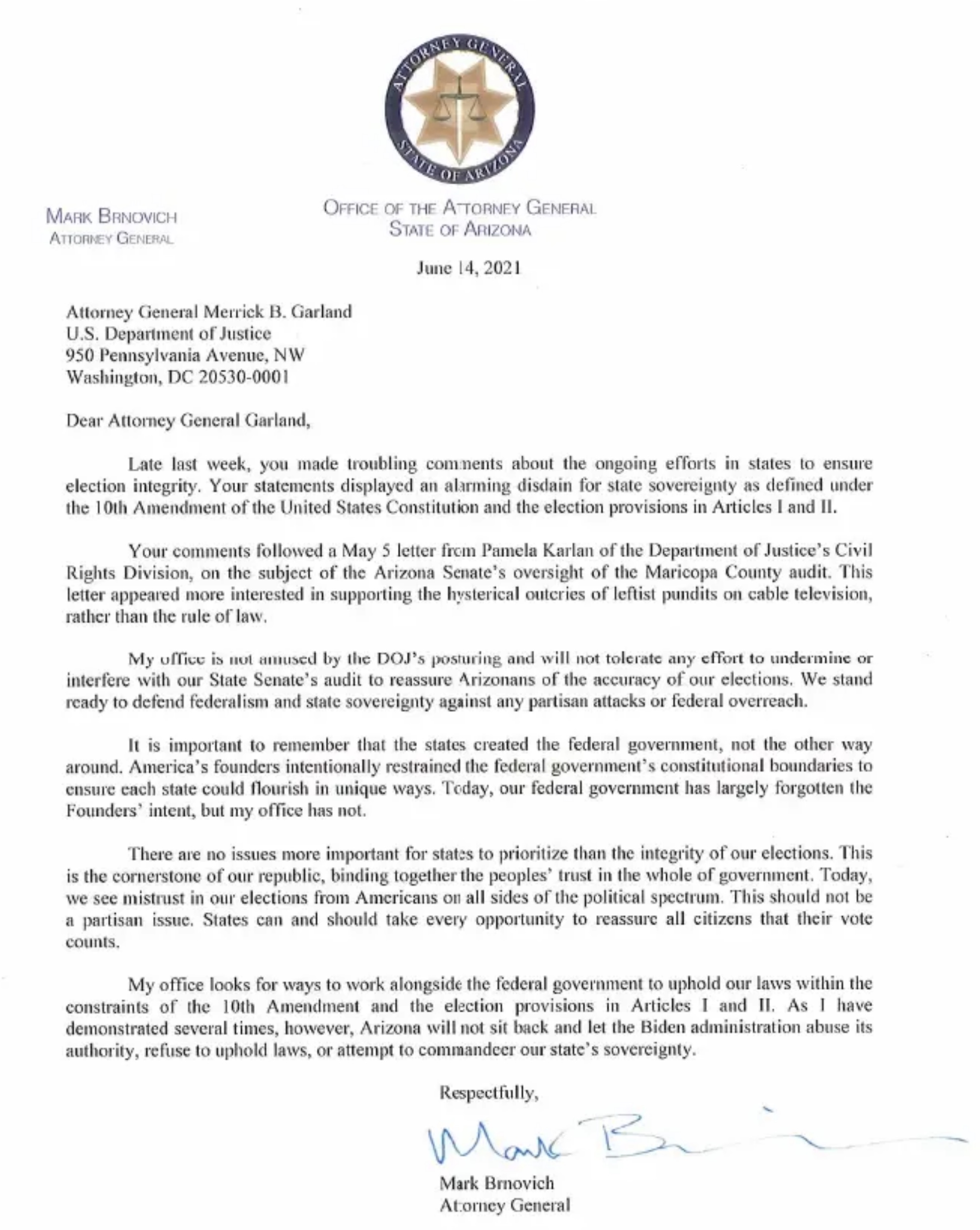