The utter indifference here speaks for itself. Nancy Pelosi absolutely refuses to directly answer a reporter’s most basic question, about whether a 15-week-old unborn baby is a human being:

Reporter asks Nancy Pelosi, "Is an unborn baby at 15 weeks a human being?"

Pelosi: "Let me just say that I am a big supporter of Roe v. Wade. I am a mother of five children in six years. I think I have some standing on this issue as to respecting a woman's right to choose." pic.twitter.com/JnCX67Cfk3

The question is based on the fact that the Supreme Court is hearing a case this fall about a Mississippi law that bans most abortions after 15 weeks of pregnancy. As you can see in the tweet, Pelosi won’t even attempt answering that question because if she does answer it honestly, it raises serious questions about why she believes killing that ‘human being’ is okay?

Here refusal to answer the questions raises a different question: why is she ignoring the science that says this is absolutely a human being?

Just for the record, here’s an ultrasound photo of a 15-week-old unborn baby via American Institute of Ultrasound in Medicine: 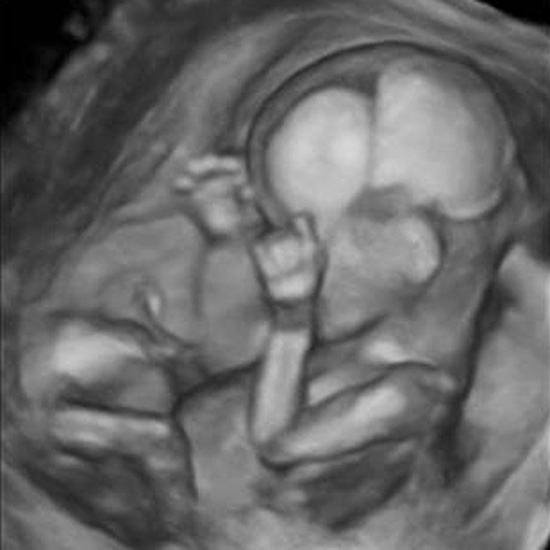 Even though it’s about the size of an orange, you can clearly see all main features of this unborn baby, from the head to the arms and legs and chest. This is what Nancy Pelosi refuses to admit is a human being because it would get in the way of her murderous agenda.

As you can imagine this got a lot of responses on Twitter. Here’s a few prominent ones:

Barbaric. Speaker Pelosi refuses to say an unborn baby at 15 weeks is a human being.

For the record, @SpeakerPelosi, a 15-week-old unborn baby IS a human being. pic.twitter.com/lhqCNE4Z9b

Democrats are unable to answer any basic question honestly. Obviously a baby at 15 weeks is a human being. She could still make a pro-choice argument while acknowledging that fact, but that would take some thought rather than just saying “I am a mother…” https://t.co/CX84Xg9jjF

Being a parent doesn't justify your radical pro-choice policies @SpeakerPelosi.

Think of all the children who weren't born because of your support for abortion.

They were all human beings. https://t.co/F3hb12gLOA

.@SpeakerPelosi refused to respond to whether she thinks a baby at 15 weeks is a human being… disgusting.

The “party of science” is once again ignoring science. https://t.co/v8al4TVSQg

How dare she call herself a "mom" instead of a "birthing person." https://t.co/qiTwkTQekM