Every year we celebrate Good Friday. For many it’s a holiday where they enjoy the beginning of a three-day weekend to rest, relax, and spend time with family and friends that ends with Easter. But just like Easter, many in our society have forgotten why we celebrate Good Friday. In fact, to be honest, the word ‘celebrate’ is a weird word to associate with Good Friday because of what happened so many centuries ago. And that’s what I want to talk about.

On this day nearly 2,000 years ago, at this very time of morning, Jesus, the Son of God, the Creator of the universe, the One who breathed breath into our bodies and gave us life, was in the midst of His sorrowful passion to rescue His bride, the Church, from the throes of death. He’d been planning this ever since Adam and Eve distrusted and rejected Him in the Garden of Eden, breaking our perfect communion with Him and plunging us into death, completely separated from Him.

It was because of His great, immeasurable love for you and me, His creation, that the God of the universe planned what would be the greatest rescue mission that could ever be planned, to unite us back with Him in perfect communion again.

After humbling Himself to become one of us, fully man but still fully God, able to suffer and endure pain as we do, exactly like us in all things but sin, Jesus, our creator, submitted himself to the most torturous and humiliating death there was 2,000 years ago: crucifixion. But it wasn’t just crucifixion. After being rejected and arrested by the leaders of the people He loved so deeply, He was mocked, spat upon, ridiculed and then tortured with a scourging while attached to a pillar. This wasn’t a simple flogging. No, the bands of leather that struck his back during this scourging had pieces of sharpened bone and metal spikes attached so that it would impale and rip the flesh from His body. Right now, nearly 2,000 years ago, this is what He was enduring, no doubt with loud groans and cries. The whole point of which, from a Roman perspective, was to create deep wounds and make the blood flow freely as Jesus made His way to the cross. 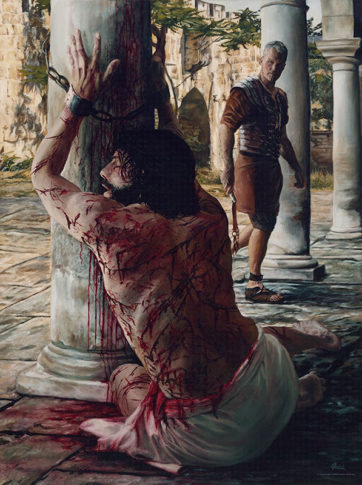 After they scourged His body for what seemed like forever, the Romans took their turn to mock and ridicule Him for a little fun. They brought him back to the Praetorium, assembled a whole troop there and scorned the God of the Universe as though He were some repulsive fraud, pretending to be the God He claimed. They put a purple robe around His battered, bleeding body, gave Him a reed as His scepter and forced a crown made out of thorns upon His head. Then they mockingly bowed down to Him, pretending to give reverence and homage to Him, before spitting in His face and beating Him with the reed they had just given Him.

Next they made Jesus carry a large, wooden cross on His bleeding and wounded back until He couldn’t. The Romans led Him on a path through the crowds of His own people, who He loved deeply, humiliating Him as they approached the place where He would be nailed to the wooden cross He carried and put on display for all the world to see.

Then came the nails. I’m sure Jesus shouted in pain as they hammered these nails through His hands and feet, attaching Him to this wooden cross. I can’t imagine the torture of this, especially after having already underwent the horrific scourging that left him a wounded and bloody mess. After this they lifted the cross and put it in place, with Jesus writhing in pain every time He took a breath, pushing upward on His wounded hands and feet. 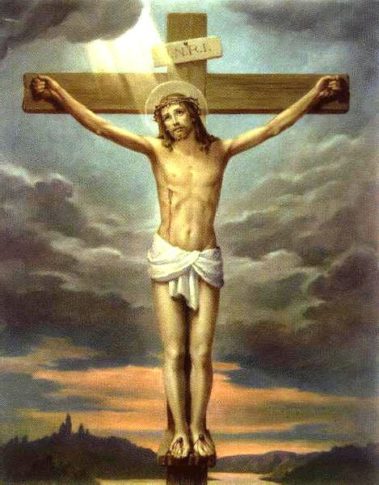 The horror of this is almost to much to think about, but this is what He endured for over three hours as His life slowly left His Holy body. It was around 3PM, later this afternoon, that Jesus finally gave up His last breath, pleading with God to forgive those who had just rejected and put Him to death.

This was the great rescue plan to save us, humanity, from sin, death and eternal separation, to reunite us with the God who loves us far more deeply than we can ever understand this side of Heaven. His love for us is a divine love, which could only be fully expressed in this gruesome and torturous death, taking our place and thus redeeming us so that we can be with Him for eternity. It’s as beautiful as it is terrible, which demonstrates the paradox of God’s love for us, that He would go to these great lengths to save us.

In three days, as we all well know, God will raise Jesus from the dead on Easter morning. It will represent a glorious victory for both God and man, which ends with the name of Jesus being exalted above all names and Him taking His rightful place at the right hand of God as the eternal sacrifice that is perpetually offered to the Holy Father on our behalf. It’s also the beginning of the Church, which has existed until this very day and will continue to exist forever in God’s embrace.

The last point I want to make to you on this Good Friday is this. While the resurrection of Jesus is absolutely crucial to our faith and very much worthy of our continued celebration, it happened because He is God. As the scriptures tell us, death simply could not hold Him. But what Jesus did for us by enduring His sorrowful, torturous passion, was something He CHOSE to do for us. It was His choice to save us in a way that could never be undone and it never would’ve happened if He hadn’t humbled and submitted Himself to it. This is why, as Catholics, we have a crucifix on display in our churches. It’s why we often wear one around our necks. We revere it because it represents the profound depth of God’s love for us, something of which we need always be reminded.

So as you go about your Good Friday, never forget what the creator of the universe did for you nearly 2,000 years ago to show you His great love. Reflect on it. Spend time with it. And prepare for a celebration of victory on Easter morning.