A new Gallup poll has found that a majority of Americans believe that changing someone’s gender is not just wrong, but morally wrong:

Gallup’s most recent gender identity data find 0.6% of U.S. adults identify as transgender; that is, the gender with which they identify is different from the one they were assigned at birth. Changing one’s gender identity is sharply contentious among Americans, who are slightly more likely to say it is morally wrong (51%) than morally acceptable (46%).

Here’s the Demographic breakdown in a chart Gallup posted: 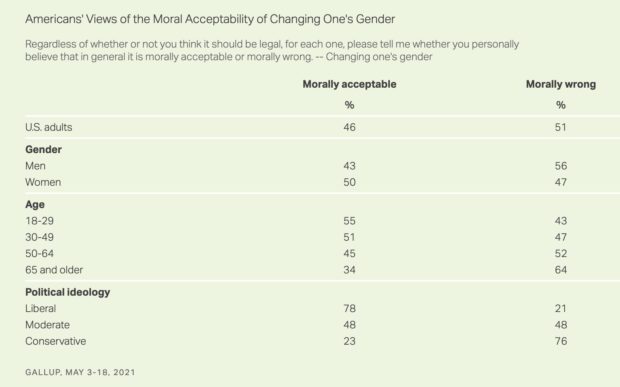 Of course the other dynamic is the political one, where liberals overwhelming love the idea of changing genders where conservatives are on the opposite end of the spectrum. And the so-called ‘moderates’ are predictably dead even.

But I think the bottom line is this, from Joe Concha:

Quite the disconnect between the overwhelming media narrative pushed and sentiment on the ground.

He’s right. The media would have us believe the entire country thinks changing genders is a-okay. But that’s not what this poll bears out. Even though it’s a slight majority – which speaks terribly about the moral state of our country – it’s still a majority and the media should represent it accurately. But we all know they don’t care about accuracy as much as they have a Democrat agenda to push.