The MSM is so excited about threats to the Capitol that they can’t wait to talk about it. And they jumped all over the story of a man with a handgun and 500-ish rounds of ammo being arrested at the one of the new D.C. “papers please” checkpoints set up to usher in the Biden era.

They have a lot of hand-wringing headlines about it, and CNN practically peed, but it could all just be a case of HO HUM, as the man (who the judge released on his own recognizance) says he is a security contractor and as it turns out, he is.

U.S. Capitol Police arrested a man at a security checkpoint Friday night with an unregistered Glock handgun and more than 500 rounds of ammunition.

Wesley Allen Beeler was arrested around 6:30 p.m. at the intersection of E Street NE and 12th Street NE, which is about a mile from the U.S. Capitol.

He had an unregistered Glock 17 handgun, 509 rounds of 9MM ammunition, a 17-round Glock magazine, and 21 shotgun shells, according to a police report.

Both CNN and Fox News claimed the man had “fake” credentials, but the Washington Post, of all things, corrected the record. 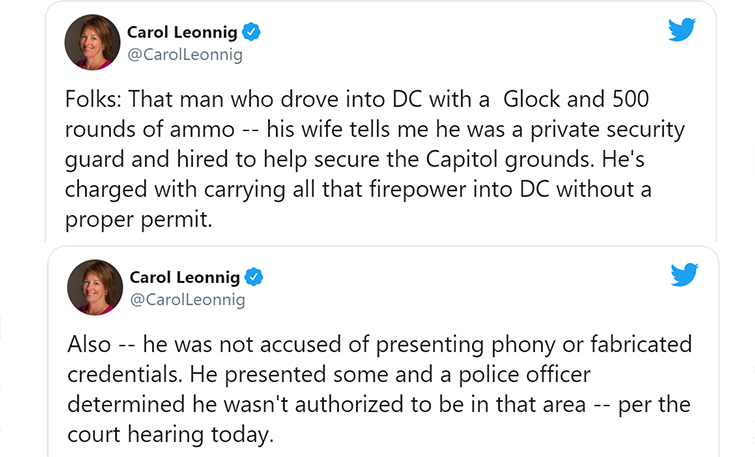 There is still some question as to whether he’s supposed to be there on a contract right now this weekend, but it’s not exactly the same as some mysterious terrorist trying to cross through a checkpoint or “border” if you will using fake ID.

Because if it WAS that the MSM would be fine with it. Maybe he should have made an ID that said “Coyote.”