One of the things we like to mention when we remember what happened on 9/11/01 is that we will “never forget”. But apparently the editors over at the New York Times have completely forgotten because today, on the anniversary of 9/11, they blamed the attack on the World Trade Center on “airplanes”:

TOWN HALL – In an article published on the 18th anniversary of the Sept. 11, 2001 terror attacks, The New York Times decided to blame airplanes for taking down the World Trade Center, completely ignoring that it was terrorists who hijacked those planes.

“Eighteen years have passed since airplanes took aim at the World Trade Center and brought them down,” reads the second paragraph in the piece titled “Remembering Those Lost 18 Years Ago on 9/11.” In fact, terrorism isn’t even mentioned in the article, except for in the subheading.

In fact the New York Times actually tweeted it, which was captured by Twitchy before they deleted it: 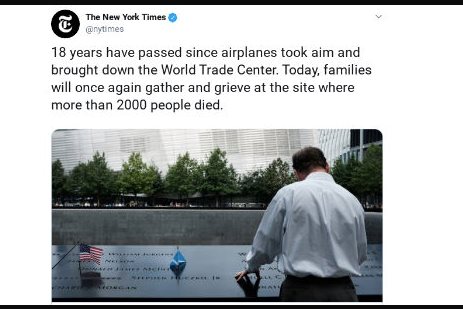 They deleted it because of the backlash that came from such a ridiculous characterization.

According to Townhall, they’ve now corrected it:

“Eighteen years have passed since terrorists commandeered airplanes to take aim at the World Trade Center and bring them down.”

Even this corrected characterization still doesn’t tell the entire truth because they don’t even mention that it was Islamic terrorists who commandeered the airplanes. In fact they don’t mention Islam or Muslims in the entire article.

The liberal media is garbage.