They can’t ever help signaling what they’re doing. And whatever it is, their defense is to mock you for pointing it out, like you’re the crazy one. ‘LOL nobody is trying to take your guns,’ they say as they grab them. ‘Ha ha Democrats aren’t socialists,’ they sneer as they destroy capitalism.

‘Nobody wants to defund the police,’ they say as they chant DEFUND THE POLICE and carry DEFUND the police signs while literally defunding the police.

And, every year, ‘there is no war on Christmas and nobody is trying to prevent you from saying Merry Christmas.’

Except they are, though. 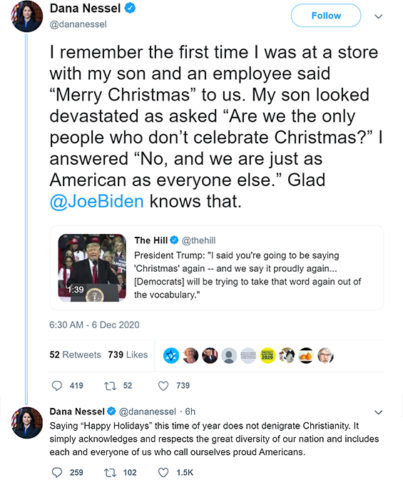 That’s the Michigan Attorney General, Dana Nessel sharing her thrill that Joe Biden understands how cruel you are to say “Merry Christmas” and that it’s reasonable to prevent you saying it. FOR THE CHILDREN.

That’s the point of her little story.

You see, a Republican, a conservative, even a libertarian, would just say “Happy Holidays” if that’s what they prefer. Or Happy Hanukkah or Merry Festivus or whatever they chose. And a conservative or Republican to whom it was said wouldn’t feel their precious belief system violated if they didn’t celebrate that same holiday.

BECAUSE THAT IS HOW NORMAL PEOPLE REACT TO THINGS.

But not “personal story” Democrats. No, they need you to not invade their safe space with your cruel different-think.

Oh sure, they pretend that the “war on Christmas” is a stupid paranoid Republican thing to manipulate dumb people. “Christmas is EVERYWHERE” they say. “It’s in Rockefeller Center and the White House and every house and business and radio station!” Yeah we know. But that ain’t really what the war on Christmas is.

No, it’s speech war, which is how Democrats start every time they want to “fundamentally transform” America. You can’t say gender, you can’t wear a MAGA hat, you can’t name a football team. And sure enough, soon enough – sooner than you think, as Dana Nessel greedily anticipated aloud – you can’t say Merry Christmas to people either.

On account of if you DO, you’re a monster who is “Devastating” a little boy.

They love to make sure that what you like isn’t allowed. Libs revel in that on Facebook and Twitter and SNL and CNN and anywhere they can. They think you’re due pain, and they want to dish it out.

Cause the thing is, “war on Christmas” is just a phrase. But the war on YOU? Heck, that is well underway.

Here are some Twitter reactions worth sharing, via Twitchy.

This is the stupidest tweet ever, combining bad parenting with this bizzarre desire to be a martyr in the face of somebody saying something pleasant to her. What a jerk. Grow up. https://t.co/OGcZoQHLGS

You could have just replied with “Happy Holidays” and moved on. I tell Jewish people Happy Hanukkah and they say Merry Christmas and WE CONTINUE ON WITH OUR LIVES. https://t.co/9JEfaKxOHG

If your kid was devastated by someone wishing you a Merry Christmas you're doing parenting wrong . https://t.co/TezqsYRo7W