Even the Biden administration called gas prices “outrageous on Saturday. It’s higher for Memorial Day weekend this year over last by a whopping dollar and a half. So much for those travel plans. And what’s worse, says Gas Buddy’s head of petroleum analysis, is we aren’t at the peak STILL.

Jennifer Granholm yesterday said that Biden is “obsessed” with gas prices. But then she turned around and said it’s all gonna work out because we have to go green anyway. Thanks a lot, lady.’

Two clips here, one of Energy Secretary being two-faced and then the gas buddy analysis.

We’re not even at the top yet says Patrick Haan. We could be hitting a national average of nearly FIVE DOLLARS A GALLON.

Of course prices will go up, that’s the “new normal.” And it’s Biden’s plan.

Gas prices have risen every day for 34 days in a row.

“That’s going to really increase global oil demand and put more pressure on the market,” he said. “And so that would actually increase the problems for the world economy and certainly would add to this inflationary problem that the world is struggling with right now.”

Inflation on all the other goods and services that is spiking under Joe Biden and the Democrats combines with the gas prices spike to act as tax – and believe you me they are getting plenty of taxes out of it.

#EconWatch: With the recent surge in #Gas prices (thanks to sanctions on Russia) workers around the globe are seeing more of their paychecks disappear at the pump. The gasoline inflation tax continues to crush workers everywhere. pic.twitter.com/F1jZobpHUb

As American families hit the roads this weekend for Memorial Day, gas prices have never been higher.

Democrats are trying to blame American oil companies for gouging customers. It’s the most absurd buck-passing I’ve ever seen. If they let us drill, if they licensed and fulfilled contracts with American energy, we wouldn’t have supply issues. And not just that, but we’ve been crippling ourselves in the name of the green agenda.

Several US gasoline refineries have shut down in recent years, or been converted to make other fuels, crimping America’s refining capacity and exacerbating the hit from high crude oil prices in the current energy crunch.

US refineries operated at 93.2 percent last week, the loftiest level since December 2019 and an exceptionally high rate for a season normally associated with plant maintenance.

The number of active US refineries has fallen 13 percent in the last decade and now stands at the lowest level in the modern era.

The list of closures includes the Philadelphia Energy Solutions plant, which had been the largest in the northeastern United States prior to being shuttered in June 2019 following an explosion.

This group includes some refineries that were suspended early in the pandemic as fuel demand sank. Some, such as Marathon Petroleum’s refinery in New Mexico, were never restarted.

The issue has “become a greater concern here in the United States as we’ve shut down a million barrels a day of refining capacity over the last year,” said Andy Lipow of Lipow Oil Associates.

These are policy failures and the pressure of government on the market. The loss to the global supply of oil through sanctions on Russia is only one part of a big picture, and that picture is developing now, under Biden.

So when you see this sticker? 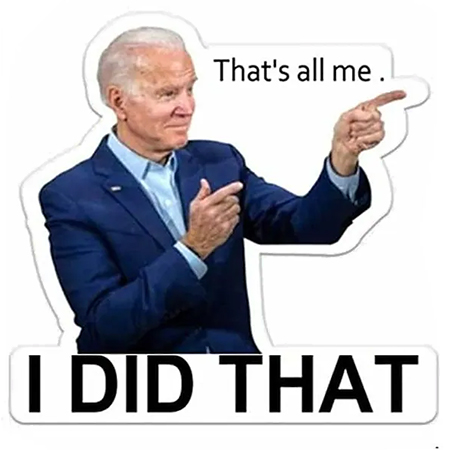 It’s correct. That’s who to blame.