House Speaker* Nancy Pelosi tried to honor the 90th birthday of baseball legend Willie Mays in the only way Democrats know how: by talking about herself. And she did it with the only style Democrats know: racistly.

Sure, it’s possible to grab the wrong photo, especially if you’re searching by name and the person has the same first name you were looking for. But would Pelosi and friends accept that answer from, oh I don’t know, let’s say Donald Trump Jr.?

House Speaker Nancy Pelosi tried to honor baseball legend Willie Mays for his 90th birthday Thursday, but those plans were initially fouled up after the 81-year-old pol tweeted out a smiling photo of herself — and Willie McCovey.

McCovey, another black Hall of Famer from the San Francisco Giants, also played around the same era as the Say Hey Kid. Pelosi apparently has smiling images of herself with both men and the mistaken photo was swiftly swapped out for a one of her with Mays.

On the left, the original, now deleted tweet. On the right, the revised tweet with the correct black man. 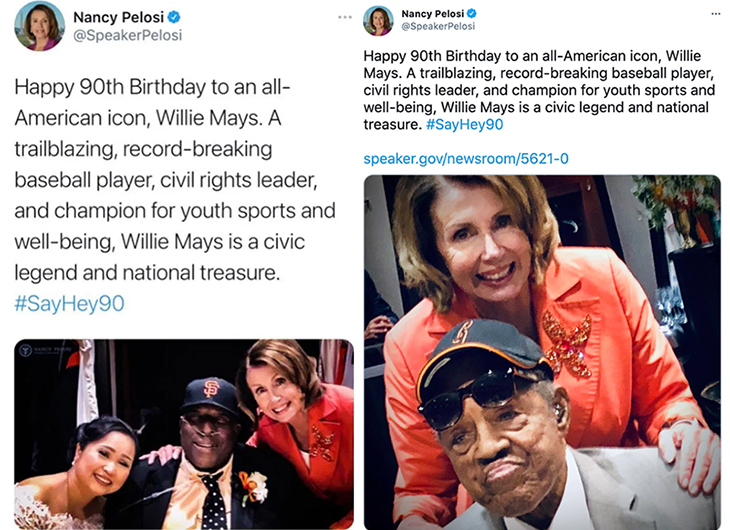 Her office swiftly fobbed the issue off to a staffer error.

“A staffer inadvertently selected the wrong photo for the tweet,” Team Pelosi said in a statement to KCBS Radio. “The photo we wanted to use was of the Speaker and Willie Mays at Willie McCovey’s August 2018 wedding. The quickly deleted photo was the wrong photo from the right wedding. We apologize for the error.”

Sorry, no sale, Nancy. You wouldn’t let any of us say that.