Politico is admitting this morning that the momentum has shifted in favor of Senate Republican candidates in Pennsylvania and Wisconsin.

They point out that while Democrats had a great summer, the ‘soft on crime’ narrative is working to hurt the Democrat candidates and bolster both Senator Ron Johnson and Dr. Oz.

Politico clearly indicates that they see a path to victory for Senate Republicans taking back the Senate.

After a grueling summer, Republicans are finally making headway in protecting their top two firewalls in the race for the Senate.

By contrast, the Democratic candidates, Wisconsin Lt. Gov. Mandela Barnes and Pennsylvania Lt. Gov. John Fetterman, had a great summer: Barnes’ top opponents in the Democratic primary all dropped out and endorsed him, giving him a head start on bringing the party together for the fall. Fetterman won glowing headlines for trolling Oz as an out-of-touch carpetbagger. Both men were leading in polls.

In the last month, however, the momentum has shifted: Johnson has retaken the lead in polling, and though Oz is still behind Fetterman, he has narrowed the gap in election surveys. Strategists in both parties cited the barrage of TV commercials labeling the Democratic candidates as soft on crime as the driving factor.

“You see something similar happen both with Fetterman and Barnes, which is they both really got pounded with negatives,” said J.J. Balaban, a Pennsylvania-based Democratic consultant. “You had pretty unpopular Republicans and you had Democrats who had not been as battered before. And both of them experienced heavy negative advertising, which happened on both sides, but of course it had a much bigger impact on the less defined Democrats than the more defined Republicans.”

Democrats have said for months that it was inevitable that the contests across the country would narrow as a gusher of GOP money rained down onto swing states after Labor Day.

But the shift toward Republicans in Wisconsin and Pennsylvania puts them on more solid footing than they were in those states over the summer. If the GOP can hold onto both seats, the party only needs to defeat one Democrat in another state — likely Nevada or Georgia — to take back a majority in the Senate.

Just to give you some idea of how much Dr. Oz has narrowed Fetterman’s lead on him, here’s the latest graph from RCP of their race back through August: 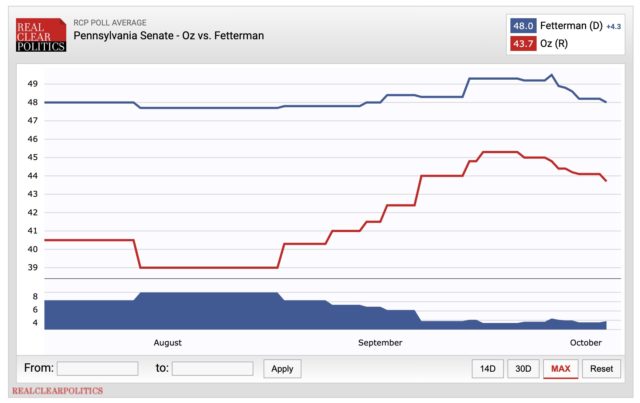 Clearly Dr. Oz still has much work to do the but trend looks very favorable with a month to go before the elections. 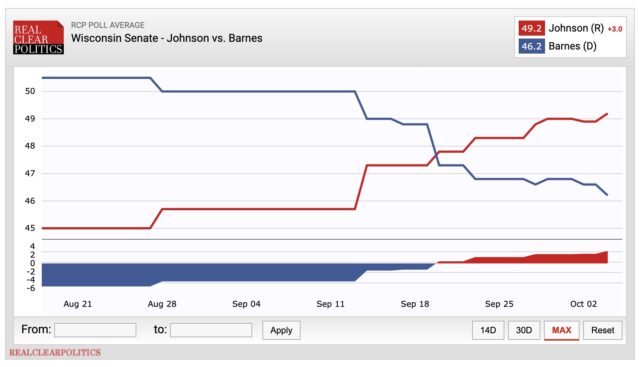 Let’s hope Johnson can keep this momentum and destroy Barnes in the election.