Joe Biden’s presidency has been marked so far by one disaster after another, interspersed with hundreds of ‘senior moments’ to add some confidence inspiration to the mix. But these disasters haven’t happened to him, but because of him.

After a while, partisan blinders and even sophisticated propaganda like photoshopped t-shirts can’t hide the truth from regular people. They see inflation. They see totalitarianism. They see it in their towns, and at their jobs. They don’t need CNN or Fox or OAN or MSNBC to tell them what they see: a failing, flailing, disaster president.

A majority of Virginia voters are displeased with Biden’s performance in office, with 46 percent approving and 51 percent disapproving. Three percent have no opinion.

The exact question in that WaPo poll was “Do you approve or disapprove of the way Joe Biden is handling his job as president? Do you approve/disapprove strongly or somewhat?” Check out the numbers:

Look at the averages from RCP. He’s overall underwater, and under in almost every single poll individually. 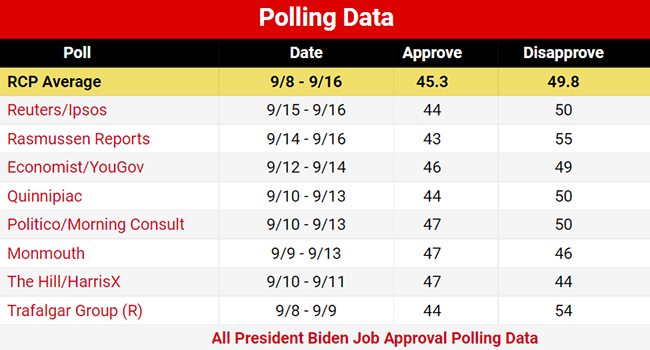 People know when someone is failing them.