President Trump just released a statement with advice for “Mitch McConnell and his small group of RINOS” regarding the latest bipartisan infrastructure bill in the Senate:

“Senate Republicans are being absolutely savaged by Democrats on the so-called “bipartisan” infrastructure bill. Mitch McConnell and his small group of RINOs wants nothing more than to get a deal done at any cost to prove that he can work with the Radical Left Democrats. It is so important to him that he is agreeing to almost anything.

Don’t do the infrastructure deal, wait until after we get proper election results in 2022 or otherwise, and regain a strong negotiating stance. Republicans, don’t let the Radical Left play you for weak fools and losers!” 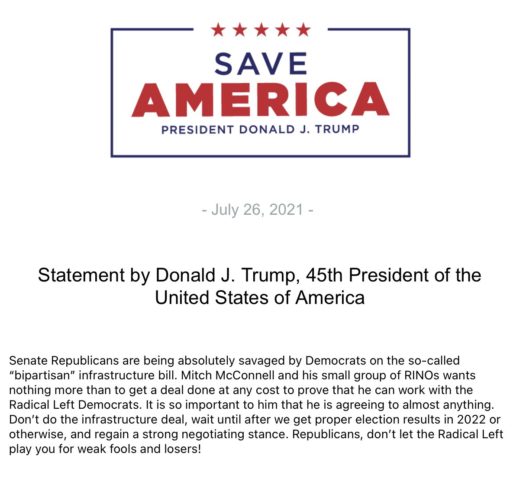 As we’ve told you before, Democrats are pushing this so-called infrastructure bill through reconciliation, which means they only need to get Manchin and Sinema onboard. So far they haven’t been able to do that.

And thus a group of 10 bipartisan Senators, which includes Manchin and Sinema, have been working on a $579 billion infrastructure bill of their own. Last week they released this statement saying they were close to an agreement:

“We have made significant progress and are close to a final agreement. We will continue working hard to ensure we get this critical legislation right—and are optimistic that we will finalize, and be prepared to advance, this historic bipartisan proposal to strengthen America’s infrastructure and create good-paying jobs in the coming days. We appreciate our colleagues on both sides of the aisle, and the administration, working with us to get this done for the American people.”

Here is the absolute latest on the bill from the Wall Street Journal yesterday, which looks close to completion.