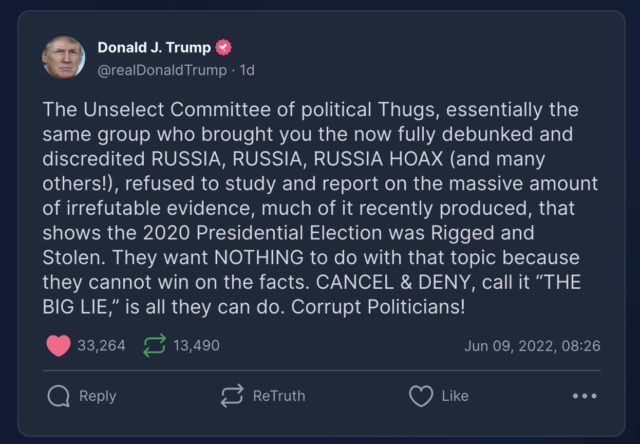 Trump wrote: The Unselect Committee of political Thugs, essentially the same group who brought you the now fully debunked and discredited RUSSIA, RUSSIA, RUSSIA HOAX (and many others!), refused to study and report on the massive amount of irrefutable evidence, much of it recently produced, that shows the 2020 Presidential Election was Rigged and Stolen. They want NOTHING to do with that topic because they cannot win on the facts. CANCEL & DENY, call it “THE BIG LIE,” is all they can do. Corrupt Politicians!

I NEVER said, or even thought of saying, “Hang Mike Pence.” This is either a made up story by somebody looking to become a star, or FAKE NEWS!

Below are Trump’s other responses to the hearing, in the order that he made them, some of which came this morning…

On Pelosi turning down his offer of 20,000 National Guard troops:

The Unselect Committee has now learned that I, as President, suggested & offered up to 20,000 National Guard, or troops, be deployed in D.C. because it was felt that the crowd was going to be very large. Crazy Nancy Pelosi turned down the offer, she didn’t like the way it looked. Likewise, the Mayor of D.C. Had they taken up the offer, there would have been no January 6th. The Unselects have ruled Pelosi “off limits, no questions.” The hearing is another political HOAX to counter Inflation etc.

On the committee ignoring proof of election fraud:

So the Unselect Committee of political HACKS refuses to play any of the many positive witnesses and statements, refuses to talk of the Election Fraud and Irregularities that took place on a massive scale, and decided to use a documentary maker from Fake News ABC to spin only negative footage. Our Country is in such trouble!

Bill Barr was a weak and frightened Attorney General who was always being “played” and threatened by the Democrats and was scared stiff of being Impeached. How do you not get impeached? Do nothing, or say nothing, especially about the obviously RIGGED & STOLEN Election or, to put it another way, THE CRIME OF THE CENTURY! The Democrats hit pay dirt with Barr, he was stupid, ridiculously said there was no problem with the Election, & they left him alone. It worked for him, but not for our Country!

….Bill Barr was a coward who would not let his U.S. Attorney in Philadelphia, where Election Fraud was rampant, to even think about looking at it (see previously posted letter from U.S. Attorney Bill McSwain). I believe that by their inaction, others were told this also!

On his own stance about the 2020 election being based in facts and proof:

Many people spoke to me about the Election results, both pro and con, but I never wavered one bit – follow the facts and proof. The 2020 Presidential Election was Rigged and Stolen…And look at our Country now – not pretty!!!

On Ivanka not having anything to do with reviewing the 2020 election results:

Ivanka Trump was not involved in looking at, or studying, Election results. She had long since checked out and was, in my opinion, only trying to be respectful to Bill Barr and his position as Attorney General (he sucked!).

On the “Rushon the Capitol”:

The so-called “Rush on the Capitol” was not caused by me, it was caused by a Rigged and Stolen Election!

I would have done screenshots for all of them but that would have taken too long. But you can find all of these comments on Trump’s Truth timeline.