Trump said over and over that Biden would ban fracking and the media called him a liar. As Donald Trump Jr. pointed out this morning, here’s one of those times from the Wapo ‘fact checker’: 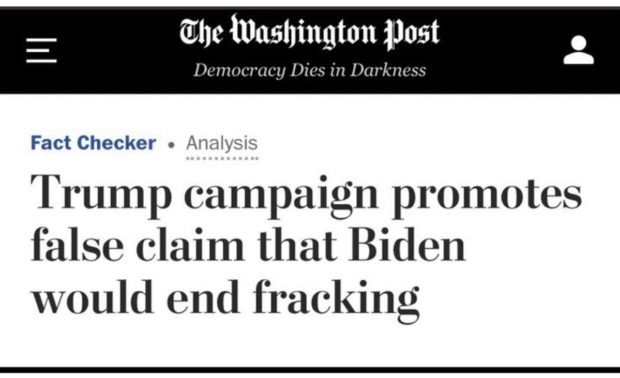 But as Jen Psaki confirmed last night, Biden is planning to begin his fracking ban soon:

“President Biden promised to end all new oil and gas leasing on federal lands when was a candidate,” a reporter asked. “Does the administration still have that commitment today? To end that lease?”

“We do and the leases will be reviewed by our team, we just have only been in office for less than a day now,” Psaki said.

Imagine how much easier it is to run as a Democrat when you have a multi billion dollar main stream media complex willing to lie and run cover for you at all times! Our media is broken. pic.twitter.com/O2GCyiLOVG

He’s exactly right, as we all saw throughout last year’s campaign for president. The lied and gave cover to Biden just like they did Obama for four years. And they’re going to continue doing it until they have no more use for him.