The US is worried that Iran, who has been fighting a low-level proxy war against Israel and fighting a proxy war in Yemen, is ramping up to fight a massive regional war in the Middle East:

FREE BEACON – The Trump administration disclosed that Iran is behind the construction of several underground tunnels leading into Israel that Hezbollah militants and other terror forces have been using to conduct attacks, according to multiple U.S. officials who spoke to the Washington Free Beacon and communicated fears that Tehran is preparing to lead a “massive regional war.”

The public identification of Iran isn’t likely to surprise international observers, but signals aggressive moves by the Trump administration to tie Iran to the rise of terrorism not just in Israel, but across the Middle East, where Iranian-backed militants continue to strike U.S. interests and allies.

The Israeli military conducted operations to destroy the tunnels earlier this week, shortly after Secretary of State Mike Pompeo held a one-on-one meeting with Israeli Prime Minister Benjamin Netanyahu on the sidelines of a NATO meeting in Brussels.

The timing of Israel’s military operations signal a deep coordination with the Trump administration, which told the Free Beacon the United States will stand side-by-side with the Jewish state as it works to thwart Iran’s terror enterprise.

I’m very glad to see the Trump administration working so closely with Israel. After 8 years of quasi-hostile tensions between the US and Israel under the Obama administration, it’s a welcome relief to see us once again helping our only western ally in the Middle East.

The terror tunnels are just a single piece of Iran’s increasingly provocative military intervention across the Middle East, including in Syria and Yemen, where a Saudi-led coalition is battling Iranian-backed rebels.

In just the past several weeks, Iran has test-fired nuclear-capable intermediate-range ballistic missiles—capable of reaching both Israel and Europe—and also continued to harass U.S. naval assets in the Strait of Hormuz, a critical shipping lane.

Iran has been threatening to block the shipping route, prompting fierce warnings from the Trump administration.

“Iran threatened to close the Strait of Hormuz again,” Hook disclosed. “The Islamic Republic of Iran does not control the Strait of Hormuz. The U.S. will continue to work with its partners” to ensure the route remains open and free of Iranian attacks.

U.S. officials fear these recent moves by Iran are a preview of its preparations for a “massive regional war.”

“The Israelis have clearly been planning this for months, which means that Hezbollah must have been working on these tunnels for years before they were detected and Israel planned its response,” said one senior U.S. official who works on Israel issues but was not authorized to speak on the record about the tense situation.

“When you add what Hamas has been doing in the Gaza Strip, and what Iran itself has been doing from Syria, there’s no escaping the conclusion that Iran has been waging a low level war against Israel while preparing for a massive regional war,” the source warned.

Here’s an image that shows the Straits of Hormuz: 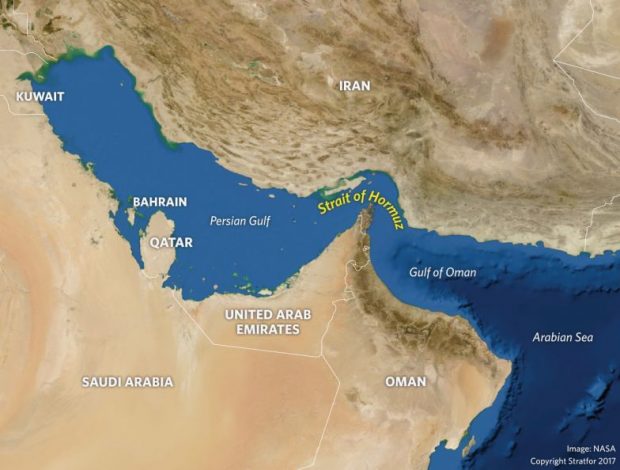 If you remember, almost exactly one year ago we reported on Iran using a new ‘Tehran-Mediterranean’ corridor through Iran and Syria that would give them unimpeded access to both Lebanon and subsequently the Mediterranean Sea. It’s nothing short of a terror highway and it was a major development that I don’t remember seeing on any big news stations.

My point is, that with this and all the proxy wars Iran is fighting in the Middle East, I don’t think it’s hyperbolic at all for the Trump administration to suggest that Iran is planning a massive war, especially with their suicidal 12th-imam beliefs. They’ve clearly been working on it and it’s only a matter time before we see escalations.

I do think, however, with the emergence of Islamic Turkey and it’s Sultan-President who at some point soon will likely proclaim himself Caliph, that Iran won’t be alone in their war-like endeavors. They are working a lot closer with Turkey these days and at the very least I’d assume there would be coordination.